This article is over 13 years, 8 months old
As he reaches his 80th birthday this month, Noam Chomsky looks at Barack Obama's victory, today's economic crisis and his memories of a childhood shaped by the 1930s Depression.
By Noam Chomsky
Downloading PDF. Please wait...
Monday 01 December 2008

I’m old enough to remember the Depression. Some of my earliest childhood memories are of people coming to the door trying to sell rags. Most of the extended family was unemployed, all my aunts were seamstresses, and there were shop boys, things like that. My most striking memories are of things like riding a trolley car with my mother past a textile factory where security forces were beating women strikers, and I remember going with my father to what looked like an extremely imposing building where he was trying to get some money and couldn’t – his bank had closed.

And of course in the background, in the mid-1930s, there was the rise of fascism in Europe which was quite frightening even locally. We happened to be the only Jewish family in an Irish and German Catholic neighbourhood which was virulently anti-Semitic, Nazi in fact, so all of these things converged. There was a very striking difference from today, judging from memories and what I’ve read. There was a feeling of hopefulness, which was quite different from now.

Now there’s a feeling of gloom and disaster and that there’s nothing we can do. You can even see it in polls – you don’t have to go by feelings. Right now in the US about 80 percent of the population think the country is going in the wrong direction and that the government is run by a few big interests looking out for themselves, not the people.

There is a lot of talk for example about how Barack Obama energised a lot of young people, a great organising achievement and so on, but that’s misleading. In fact the media, who approve of it, have it more or less right. What they point out is that he’s organised an army which takes instructions.

There is a front page article from just after the election in the Boston Globe, maybe the most liberal newspaper in the country, with a big lead article which said that the wonderful thing about the election is that Obama has no debts to pay. He organised this huge constituency but they were followers who were organised to get out the vote or canvass by phone. They imposed no debts on him, they were not a constituency that he was responding to, to whose demands he was responding.

The Wall Street Journal at the other end of the spectrum had a rather similar article, also praising Obama, saying that this is a great election because it shows what a great democratic country we are. But someone pointed out that Obama’s army of followers is now waiting for its next instructions, “What doorbells do you want us to ring when you want to pass some legislation?” That’s radically different from a functioning democratic society.

In the West the election of Obama is regarded as a miracle that could only happen in the US. Well, by Western standards, that’s correct. On the other hand, in the Third World this is not unusual. Take, say, Bolivia. They had a democratic election in 2005 of the kind we can’t even dream about, reinforced by a referendum just this year with an even greater vote for the president. Evo Morales was elected by mass popular movements, he was from their own ranks. He comes from the most oppressed part of the population in the western hemisphere, the indigenous population. They had real issues, which were fought in the Water War a few years ago, when popular organisations drove the World Bank and Bechtel out of the country because they wanted to privatise the water.

Their candidate was not someone who was giving them instructions. That’s a democratic election. The 1930s had a lot of that. There was a lot of activism and organising, it was politically very alive, you could hear a wide range of political debate and discussion and enthusiasm. There was a general feeling that bad as things were somehow we were going to get out of it. That’s not the feeling today, the feeling’s much more negative, much more passive.

Obama’s supporters have been very energetic and enthusiastic, but essentially following instructions. So the question is whether this can become an organised activist movement, and that’s by no means impossible. If you count the number of people involved in activism it’s substantial, all over the place. But even the fact that the country has been surviving pretty much on debt has an atomising effect – it means each person is struggling to make it for themselves.

Nobody has a clue what’s coming next with the economic crisis. There are leading figures on Wall Street who say we are already in a 1930s Depression. Others say it’s very close. Others think we can put on some band aids and we’ll pull out of it. The fact is nobody really knows. What’s happening is quite opaque. There are several crises going on: there are two ongoing and there’s a third just waiting. The one that’s on the front pages is the financial crisis, which is very severe, and it’s a result of the financialisation of the economy. It has a resemblance to the 1920s, but the effect is that the real economy, the manufacturing base of the economy, is hollowed out.

For a large majority of the population the past 30 years have been perhaps the worst in US economic history. No major wars, no big Depression, but real wages have stagnated while benefits have declined. Working hours have gone way up, the infrastructure has collapsed, but people have maintained their lifestyles through debt.

The whole country survives on debt. Just where this leads is hard to say. There is also a recession in the real economy, and that’s where the job losses are coming from, and the pressure on wages and so on. That’s two recessions. The third monster in the closet is the healthcare system which is hopelessly inefficient and also very cruel. Huge numbers of people just don’t get healthcare.

Healthcare in the US is rationed by wealth, not by need. So people in my income level get great healthcare, but if you spent a little time in an emergency room you would see quite a different side of the story. There are roughly 50 million people who don’t have any insurance and tens of millions of others who don’t have adequate insurance. It is a privatised system, the only one in the industrialised world. It costs about twice that of other industrial countries and has some of the worst outcomes.

If your healthcare is tied to a job, say General Motors, and General Motors goes bankrupt, there goes your healthcare. This leads to plenty of uneasiness and insecurity. The population knows what they want, for decades a large majority have wanted a national healthcare system, but that’s typically described as politically impossible.

You get a good insight into how the country runs by seeing what’s happened to healthcare reform over the years. As late as the 2004 elections it was unmentionable in a political campaign, and that was noticed. The press commented that John Kerry couldn’t bring up any government involvement in the healthcare system.

So what changed? That’s an obvious question to ask if you want to know how US democracy works. Public opinion didn’t change, it’s the same as it’s been for decades. What changed is that manufacturing industry shifted position.

The industry has been very seriously harmed by the inefficient privatised healthcare system. General Motors says it costs them over $1,000 more to produce a car in Detroit than across the water in Canada. When manufacturing industry, a big section of US capital, begins to shift then the direction it’s going in gets political support. So that’s essentially the change.

The important question is how people energised by Obama are going to react to the inevitable disillusionment when he doesn’t lead us to heaven. And he won’t. Will they react as people reacted in the 1960s when the Camelot fever around J F Kennedy dissipated, by becoming organised to act as militant leaders leading to real changes? Or are they going to just drift away? Or are they going to move to the right?

Because there’s also an undercurrent – one which you can see in Sarah Palin’s rallies, and hear if you listen to talk radio.

There is an undercurrent that is reminiscent of the things I can remember from my childhood. 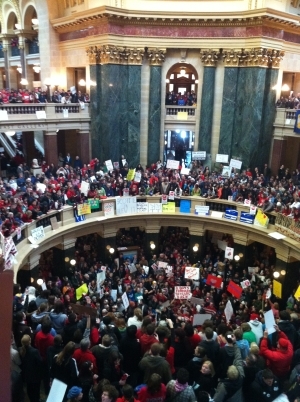 Online only: The US health system vs National Health System

The View from Hubbert's Peak