This article is over 11 years, 7 months old
Many people feared a fascist breakthrough at this election. Alys Zaerin reports on the campaign that beat the BNP.
By Alys Zaerin
Downloading PDF. Please wait...
Tuesday 01 June 2010

Unite Against Fascism (UAF) helped create a massive tidal wave which washed away the Nazi British National Party (BNP) in Barking and Dagenham. Before the elections this east London borough council had a BNP official opposition made up of 12 local BNP councillors. They poured hundreds of thousands of pounds into their campaign to elect 34 councillors and their führer Nick Griffin as MP. Thousands of anti-fascist activists mobilised in the borough to oppose the BNP and on 7 May our dreams came true – every single Nazi got kicked out.

The unity forged around fighting fascism was fundamental. The UAF strategy took into account disagreements on what the political alternative to the BNP should be. There was deep disillusion with a Labour Party that presided over the crises in housing and unemployment. UAF’s message was “Use your vote to stop the BNP”. Though there was a strong argument that only a Labour vote could stop them, we maintained that a vote for any other party was a vote against the Nazis. We used this message to connect with disenfranchised Labour voters and to motivate them to vote.

Organising meetings, days of action and protests saw trade unionists, Labour Party activists, community activists and students come together. People representing many of the borough’s ethnic communities became activists and leaders of the campaign. We had two days of action sponsored nationally by the NUT and PCS unions, enabling us to connect with local workers, black and white, who knew all too well the impact of the BNP stoking up racism within their workplaces.

The campaign started in earnest in January when an emergency protest was called after the BNP announced it was standing. An organising meeting was then called, and invitations went out to form the steering group, made up of trade unionists, local community activists, pensioners and Labour Party council candidates. Very quickly the steering group started to organise days of action.

We organised 13 days of action, gave out over 200,000 leaflets and mobilised hundreds of people consistently. We took a proactive approach – taking voter registration forms with us as we campaigned. Overall we produced over 15 different leaflets.

We also visited workplaces such as the Barking bus garage, Barking and Dagenham College and the Frizland Learning Depot, and also the PCS picket line at Barking Job Centre. Our Love Music Hate Racism gig was really important. It was a great night where you saw black and white people from across generations have fun together: the BNP’s nightmare.

What set the UAF campaign apart was our consistent and meticulous activity and the sharpness of our arguments. We did not give in to arguments about immigration. Our leaflets celebrated the diversity of our communities. We focused on the BNP and their fascist ideas, exposing them as Holocaust deniers, advocates of rape and Hitler followers, and highlighted their links to terrorist organisations.

Our arguments politicised the borough. We didn’t shy away from knocking on people’s doors in the seven wards where the BNP had their previous electoral success or those who said that they had considered voting BNP. In most cases we changed people’s perspectives.

Our canvassing returns showed 60 percent of voters were anti-BNP. A small minority were hard BNP voters and the rest we argued with and attempted to persuade. Only a few of the anti-fascist majority knew who they would vote for. We worried that if people didn’t know who they were going to vote for, they wouldn’t vote at all. Significant on the doorstep was the bitterness against Labour. Some people would initially holler at UAF canvassers that “it’s too late to be coming round here now” assuming that they were Labour Party campaigners.

Equally remarkable was how isolated hard BNP voters tended to be. There were many examples of the neighbours of BNP voters or even of BNP candidates feeling confident enough to put anti-BNP posters in their windows. After every day of action we would get a flurry of phone calls and returned membership forms from people who had received our leaflets.

A politicisation and polarisation was visible in the borough, especially in the last few weeks leading to the elections. Pastors and imams spoke about the BNP in their sermons; parents outside the school gates discussed voting; young people texted their friends; and debates took place within workplaces.

On 5 May there was a watershed moment. Bob Bailey, leader of the BNP councillors, was filmed by the BBC attacking young Asian men. It was reported that Nick Griffin had been pelted with tomatoes by young people while out campaigning. Dozens of BNP thugs tried to intimidate voters at the polling stations, so UAF leafleted outside them to ensure that people could vote without intimidation. One group of mainly local female campaigners ejected the BNP from one polling station. Labour won by a landslide in Barking and Dagenham. In her acceptance speech Margaret Hodge MP called the BNP fascists for the first time.

Clearly it is important that UAF continues to work hard to fragment the BNP’s electoral base. We must isolate racism and fascism wherever they rear their ugly heads. The conditions exist for the BNP to flourish again.

Barking and Dagenham is already feeling the cuts in its education budget, the local accident and emergency ward, and more. There urgently needs to be a resistance movement to these assaults, comprising the same trade unionists and activists as in the anti-fascist campaign and more. The question is, what else can we achieve when we work together?

FN: A warning from France 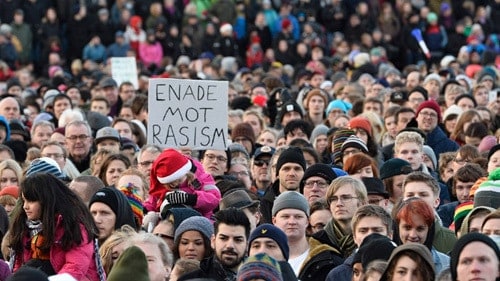