This year the 18th Lesbian and Gay Film Festival showpieces one of the still remaining controversial areas of gender identity and sexuality, transsexualism. Black American lesbian film-maker Stephanie Wynne’s documentary style film, The Cookie Project, takes up the challenge in a very sensitive but down to earth way.

Derwin Fields is a black man who has served in the US army and is now a cop in the Los Angeles police department. He is married with two children and is the model of conformity. Three years later he has ‘changed sex’ and is an out lesbian. Derwin is now Cookie, the nickname acquired due to her passion for biscuits. She met up with Stephanie Wynne after placing a personal advert in Gay Black Female magazine, which Wynne also edits. She thought it would be a good subject for a film.

Derwin’s internal struggle is not unusual as many male to female (MTF) transwomen try to prove to themselves that they are really men by being extremely macho. The idea that people ‘change sex’ due to a sudden whim fails to understand the internal emotional struggle that trans people go through to survive. We still live in a very straight world and not to conform is not the easy option.

This 60-minute film concentrates on the journey from male to female and the place in between. Cookie is a real transwoman, not an actor, who makes a potentially challenging subject accessible due to her good humour and honesty. A transwoman friend of mine could not understand why an MTF transgender person was a lesbian – why bother ‘changing sex’? Although The Cookie Project does not explicitly deal with this issue in any depth, Cookie identified with the female gender (gender identity), but was attracted to other women (sexuality), which is not uncommon for transwomen. It is the separation of identity and sexuality that people can find difficult to understand.

If you’re looking for an overtly political documentary about transgender this is not the film, as it is completely non-judgemental. Cookie explains her situation as ‘god’s will’ and is a member of the Unity Church, established by a gay pastor. She travels to Thailand for the gender reassignment operation, as it is cheaper there than in the US. However, the redeeming feature of The Cookie Project is the section that concentrates on the ‘sex change’, the transformation of the penis into a neo-vagina. This is not for the squeamish. I kept my eyes pretty firmly shut, as the 150-minute operation was condensed into 20 minutes, with the occasional peek.

Changing gender is not in itself a revolutionary act, but the demand for a society that allows people to determine their own gender and then gives them not only emotional support and help but also provides free access to medical procedures, if desired, would be. With the health service under attack by the Labour government, transpeople are not a priority where it really matters, giving them the full emotional and medical support they require. While the government is introducing a gender recognition bill to allow birth certificates to be changed to show a person’s new gender, this will not be of much practical use if you still look like your previous gender.

The Cookie Project is touring Britain and Ireland from May to September. 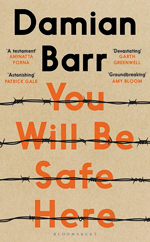 You Will Be Safe Here

Art Under the Westway