Francis Combes lays out his ideological stall in the first poem, which stands alone, outside of the four sections that follow. In “No, the Earth is Not Round” he writes, “And the world goes haywire/ Because the earth isn’t round/ At least/ Not yet”.

Combes, who is based in France, is excoriating in his criticisms of capitalism and frequently sardonic. In “This World is Well Made” he mocks: “Yes, this world is well made:/ there are streets for beggars/ and palaces for bankers./ Everything is as it should be.”

However he doesn’t collapse into cynicism and desires an understanding of and action against capitalism.

In “Black Tide” he uses the metaphor of an oil spill, arguing: “It’s time to mutiny/ put our officers/ on their mettle/ bring the ship back to port/ disarm it/ scuttle it”.

He takes on the idea that everything has a price: “THE WORLD IS NOT A COMMODITY” and he ponders in “Nature: After Sales Service”; “For the lilac in flower, which grows over the fence/ and whose odour floats in the street/ will we get a bill?”

His poems also retain a great deal of hope. In “Provisional Will” written to his son he wishes to leave him; “A square of blue sky/ A bit of red rag/ A reason to at least stay on your feet/ And to wish in your turn to care for life/ On this patch of earth”.

The stand out section for me is “HOMELESS POEMS”. Incisive and devastating, he exposes some of darkest aspects of the lives of homeless people in France. In “A Crown for Ginka” he recounts the life of a young migrant woman from Eastern Europe who came to Paris “dreaming of freedom” but her life was ended “by twenty stabs”.

She was mourned and remembered by her community: “On the grill/ for several days/ has remained a sheaf of flowers,/ a crown for Ginka/ who saw herself as a top model/ or beauty queen,/ Ginka who was not even/ queen/ of her own life”.

In “Merry Christmas” he describes a homeless man who has wrapped himself in a metallised survival blanket; “He looked like a present,/ one of the poor,/ the city had given itself./ (Christmas forgets no one).”

“If the Symptoms Persist”, is directly referenced in “A Prescription” where he advises, “get a little exercise/ (love, work and struggle/ are particularly recommended).”

Published in French and English, as a collection it is accessible but not always easy, and I am already looking forward to repaying a visit to it and exploring further this self-styled doctor of poetry.

'Friend of the Unfriended Poor' 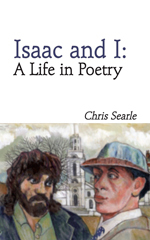