One of the nastier aspects of the coalition has been the way it has not only attacked pensions and other key conditions in the public sector, but at the same time has also tried to undermine effective opposition to these attacks. First came the threats to impose a threshold for turnouts on strike votes. Then Cameron announced a review of the funding for trade union facility time in the public sector.

The announcement followed calls from local government minister Eric Pickles for councils to publish details of the salaries paid to lay union reps. The right wing media – egged on by the so-called “Trade Union Reform Campaign” (which is headed up by MP Aidan Burley, best known for allegedly attending a Nazi-themed party at a French ski resort) – have leapt on this and used it to mount a minor witch-hunt against union reps in the NUT and other unions.

There is no legal basis for an attack on facility time, with the arrangements generally granted so lay officials can spend at least some time on the important job of representing members and negotiating with the employer. But the time allowed is rarely sufficient, with a recent TUC report highlighting that reps often use their own time to do union work. And there is evidence that union reps actually produce extensive savings, in the form of better health and safety, lower rates of dismissal or resignations, and fewer tribunal cases.

So what’s it all about? Trying to blunt the fight back over pensions is a crucial motivator for the Tories, but it’s not the whole picture. Attacking facility time is a way of putting pressure on key union activists at a moment when employers, especially in local government, are trying to ram through cuts to terms and conditions as well as jobs and services. And in areas where the government and its supporters are trying to make wholesale changes such as schools, curbing or ending facility time could stop the teaching unions from opposing the changeover to academy status, or prevent them from continuing to organise where the switch is successful.

In announcing its review the government is trying to influence attitudes to union reps. It wants to portray public sector reps in particular as somehow cosseted, and drive a wedge between them and other workers. And while moves against facility time are not yet widespread, the squeeze on funding as a result of budget cuts is providing employers with a real incentive.

At the same time, though, the government may need to tread carefully. Facility time first emerged in the 1970s as an attempt to deal with a militant shop stewards’ movement. Granting reps time off from their normal work for union duties was seen as a way of “formalising” industrial relations, and incorporating militants into official structures that would, it was hoped, dull their edge by cutting them off from the rank and file.

But as the 1970s turned into the 1980s, the strategy shifted away from incorporation to something much more threatening, as the Tories looked to bring the unions completely to heel. This was symbolised by the sacking of Derek Robinson, the full-time convenor at the then-nationalised British Leyland (BL) car plant in Longbridge in Birmingham.

As a member of the Communist Party, Robinson endorsed the company policy of “participation” under which shop stewards joined in with a variety of management initiatives. But in November 1979 he was sacked, largely as a precursor to the privatisation of, first, BL itself, and then a raft of other state bodies by the Thatcher government. Since then the individualisation of much of the framework of industrial relations has seen many union reps forced into a defensive stance, with more time spent on casework than in the past.

For these reasons alone, if attacks on facility time spread, it will be important to defend union reps in every case (the failure to prevent Robinson’s sacking – whatever his mistakes – heralded a series of major defeats for workers). But there is a risk to the government’s strategy. This is that putting pressure on more or less official structures – including facility time – can make workers more likely to look to unofficial methods. That might not matter to the more gung-ho elements among the employers, but as the victory of the rank and file construction workers shows, it’s a risk they might need to recognise. 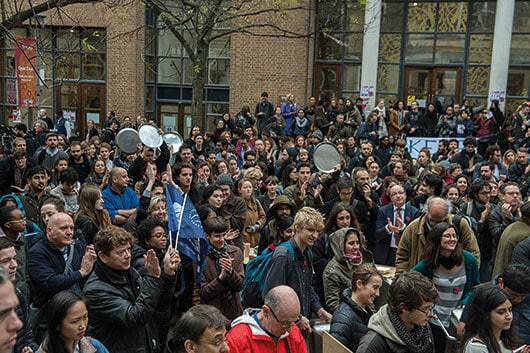