Why should any socialist today care about Hegel? Wasn’t he just a difficult, abstract, bourgeois philosopher?

We would argue Hegel is worth careful attention even though he is a difficult, abstract and bourgeois philosopher and reading him is “like chewing gravel”. That was one reason to write a book that makes the core of his thought accessible. What is significant is not this or that particular piece of writing, but the overall method and approach that he adopted. This was applied by Marx in his time, and can and should still be applied by socialists today.

Take the issue of alienation. Hegel was trying to work out what the relationship is between human beings and the world we live in. His was a bold vision, in which everything is seen as part of an interconnected whole. Today we are painfully aware of the impact humanity (and fossil fuel capitalists in particular) have on the climate, but we experience the world outside us — including the climate — as separate from us and sometimes as a force acting against us. Few people today would agree with Hegel’s explanation for alienation (based on estrangement from God), but the fact that he posed the question is all-important.

Another example of Hegel’s method is history. Before him this tended to be a passive record of events or propaganda glorifying this or that member of the ruling class. Hegel insisted that there are clashing motive forces which drive historical change forward, and these can be understood. Again his answer (that history is the development of the “Absolute Idea”) nowadays has little support, but through trying to understand the past he raised the question of how we can shape the future.

Hegel is not disqualified because he was a bourgeois philosopher. On the contrary. He gained insights into alienation and history precisely because he was a member of the bourgeoisie, a class which during his lifetime was at the heart of a massive revolutionary process.

The French Revolution that began in 1789 was a world-changing moment. Episodes such as the storming of the Bastille showed how people could transform the society they lived in (rather than it operating as a hostile force acting upon them). It also showed how history is a process of contradiction and change which develops and is shaped by human action rather than a long procession of disconnected occurrences.

Once the capitalists had broken through they ceased to be revolutionary and Hegel turned reactionary with the rest of his class. He opposed further change but his method, his approach to understanding the world and the process of change, remained the guiding star.

What is the relationship between Marx and Hegel? We tend to hear that Marx stood Hegel on his head — did he then just move on?

Karl Marx argued that Hegel’s dialectic was “standing on its head” and that it must be turned right side up again to discover the “rational kernel within the mystical shell”. And this is a pretty pithy way of capturing his relationship with Hegel. At least, that is, in terms of dialectics and Hegel’s account of alienation and historical change, which we believe are the three areas which were most influential upon Marx, Friedrich Engels and the wider Marxist and socialist movement.

Put another way, Marx took several of the central insights that Hegel offered while rejecting much that was peripheral. He then adapted these into an understanding that acknowledged the role ideas play in shaping the world, but saw work and the meeting of our need for food, drink and shelter as the very foundation of all that we do.

Consider how Marx alters Hegel’s account of historical change. Marx (and Engels) agree with Hegel that all attempts to understand the world must be placed within a historical context and that history conforms to laws or patterns of development. They also accept Hegel’s claim that ideas as well as material reality are important in shaping history. However, they insist that material reality is the most important factor. Marx and Engels also agree that what drives history are internal contradictions, in other words a dialectic, but are clear that this movement is not automatic and that there are often unintended consequences of actions.

The chapter on the dialectic is central to the book and quite challenging. Why is it so important in your view?

“Dialectics” is a method of argument that involves, in some way, a contradictory process between opposites. The easiest way to see how intuitive dialectics can be is through the example of capitalism. Capitalists own and control the means of economic production but they do not own the labour power necessary to put them to work; rather, they require another class, namely, the working class, a class that has to sell its labour power in order to survive. Capitalists and workers are “opposites” in the sense that they are diametrically different from one another. The “contradictory” process refers to there being a conflict or tension between the opposites — capitalists and workers. I am sure that to readers of Socialist Review, the conflict between bosses and workers is very clear. Further, it is this conflict which brings about change under capitalism.

This is why dialectics is so important. It reveals that there are fundamental conflicting interests in society and that it is these interests that drive historical change.

We should point out that Hegel was not the first to use dialectics, and in fact he was greatly influenced by the Greek philosopher Plato and by his fellow German thinker Immanuel Kant. Both Plato and Kant used dialectics to promote scepticism, the view that we can know nothing of the world around us. However, Hegel had no such intention. Rather he saw dialectics as key to understanding our fundamental ways of seeing the world, that is, humanity’s common store of knowledge that had been transmitted from generation to generation.

We would like to apologise to readers of the book if what we write on dialectics is still challenging because one of our stated aims was to make Hegel clear and accessible to all. In our defence we would point out that even those like us who are very sympathetic to Hegel have described reading his writings as “often a trying and exhausting experience, the intellectual equivalent of chewing gravel.” In light of this, perhaps we should take “challenging” as a compliment!

Why do some Marxists dismiss Hegel and dialectics?

To answer this question you need to understand what Marxism looks like without dialectics. Hegel and later Marx rejected the idea that history exists as an independent force carrying us along in its wake.

As Marx argued, human beings “make their own history”. If you remove dialectics, if you remove the idea that change is the result of contradictory processes between the opposites we spoke about above, you’re left with the thought that socialism is inevitable and not something that has to be fought for and won. You’re left with a mechanical Marxism.

The most troubling occasion when this did happen was in the 1930s and 1940s when fascism in Europe represented the largest danger that the working class has ever encountered. For mechanical Marxism, fascism was a brief deviation from the general upwards path of historical progress and this analysis led the German Communist Party to argue that any victory for Hitler would be short-lived. This also lays behind the “third period” policy of the Communist International or Comintern.

Directed by Stalin the Comintern proclaimed that capitalism was entering a period of final collapse and social democratic parties were in fact “social fascists”. Consequently, it argued that not only should Communist Parties not work with social democratic parties against the fascists but the Communist Parties should do their utmost to destroy them. The rise of Mussolini, Franco and, most terribly, Hitler shows the tragedy of what non-Hegelian Marxism can result in.

To be clear here we are not arguing that the mechanical Marxism of Stalinism and the subsequent rise of fascism was the result of Stalin not reading enough Hegel! The prominence of mechanical Marxism was rather a theoretical justification for actions taken for economic and/or political reasons.

Having said this, a clearer grasp of the centrality of Hegel’s thought for a Marxist understanding of the world may have made it easier for revolutionaries to see the errors of mechanical Marxism and to oppose the distortions and false claims to orthodoxy of Stalinism and its policies.

So, in this the most prominent example of Marxists rejecting the dialectic, their reason for doing so was to theoretically justify unpalatable political and economic decisions.

How does understanding Hegel help a socialist trying to change the world today?

Anyone who wants to change the world faces massive obstacles. The capitalist ruling class controls the economy, dominates the state, owns the press and so on. Even the best-intentioned socialists can be pushed in two misleading directions.

One is to put faith in impersonal forces that will create socialism automatically: the continuing growth of the working class, or the inevitable return of economic crisis, will somehow finish capitalism off without human intervention. This was the approach taken by the reformist Social Democracy in the early 20th century and then by Stalinism. The other trend is to imagine that the actual circumstances of the time can be ignored and sheer willpower and devotion to the cause will be sufficient to bring about progressive change.

Hegel’s method avoids both traps and this is why Marx and Engels found it so useful. It requires an analysis of the whole picture but rejects passivity, because it recognises contradictory forces exist as well as the role of human intervention in the clash between them.

The world we live in now is dramatically different from the one inhabited by Hegel in the 1800s, but we can learn from one of the greatest thinkers of the bourgeois revolutionary period when we look for revolutionary change today. And with environmental catastrophe facing us, that change is more urgent than ever.

Q is for quantity and quality 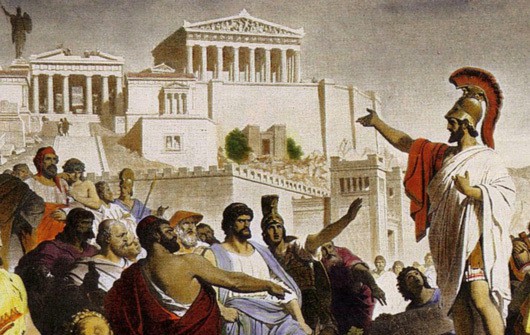