Iraq: The End of the Beginning

This article is over 16 years, 11 months old
Whose elections are they anyway? Mundher Adhami looks at the prospects for democracy in Iraq.
By Mundher Adhami
Downloading PDF. Please wait...
Tuesday 01 February 2005

The outcome of the Iraqi election means little to the reality on the ground: the rise of the resistance, lack of security and collapse of electricity, water and health services.

But the Sunni-Shia sectarian strife beloved by the US media is still resisted in Iraq. Almost all Iraqis live in either mixed areas, are in mixed marriages, or have mixed genealogies in religious or ethnic terms.

Ethnicity may be less mixed outside big cities, but all large tribes have Sunni and Shia branches. Sectarian differences have never been a major issue of conflict in Iraq, as much as the British tried to promote divisions during their rule after the First World War.

The collapse of the state after the invasion in 2003 has greatly increased the role of mosques as standing local assemblies, mutual help centres and source of guidance by clerics. But these are practical issues carried out under religious banners. While Iraqis are more religious than they were in the 1960s, the media are hell-bent on basing their reports not on socio-economic, class and political groups’ ambitions but on ideologies. However high the sectarian parties were riding a year ago, they are now in clear ebb. In the first round of elections for a student union at Baghdad University early this January, nearly all those who campaigned on sectarian grounds failed. (In the large medical and political science colleges virtually none were elected.)

So the main danger of the election is to the puppet regime’s fragile coalition. That is perhaps why many personalities who cropped up after the invasion, including leaders of ten parties of the current puppet regime, both secular and Islamist, called for elections to be postponed so that more people could see them as ‘fair and free’. Whatever the outcome of the election, and whatever is done by the US and British occupation for diplomatic or media reasons, Iraq is in the dynamic of a rising insurgency.

This is an national liberation movement fed by a natural human reaction to brutal, illegal foreign occupation. What goes under the banner of an election is likely to be a media event, a spectacle with no relevance or reality to most Iraqis – just another milestone that has been and gone – like the handing-over of sovereignty, the Interim Iraqi Government, the Interim National Council and so on.

The most visible part of this occupation is the indiscriminate massive collective punishment that follows resistance attacks on US patrols or convoys, including whole cities. Such colonial punishments, especially the callous and racist kind exemplified by Sharon’s Israel and the Pentagon, leads to violent resistance. This is regardless of the sham like elections, and of costs in human lives to insurgents and civilians. In November 2004 the academic medical journal Lancet reported a John Hopkins medical school scientific estimate of 100,000 civilian deaths, mainly due to aerial and artillery bombing. The authors declared that this may have been an underestimate, since the 33 localities sampled excluded hotspots like Fallujah, to the west of Baghdad. The blood of each of these 100,000 victims, each with a name, photos, memories and doting parents or siblings, like any in the west, calls for justice.

The fate of Fallujah sheds light on the events unfolding. Since the occupation attacks on the city were justified by the need to hold elections there. For a month last spring, and for two months from early November, the US marines effectively demolished the medium size city. Still uncounted thousands of its 300,000 people are dead, many because the marines have ransacked the hospital and denied the Red Cross and Red Crescent access to the injured. The rest of the population are now refugees, often in the open in the frosty western province, seeing themselves very much like the Palestinians of 55 years ago. It is no surprise that many thousands of these refugees, whether students or mature professionals, join the insurgency, since there are no jobs or schools to go to. The arms are around for the taking, and the call for revenge is unstoppable. The interim president Al-Yawer admitted that the resistance continues in Fallujah, and the election commission declared that the location of the three voting points in Fallujah will remain secret till the day of elections. So much for making Fallujah safe for the ‘sacred vote’ on 30 January.

In fact much of this election remains secret. The whole country is regarded as one constituency in a proportional system. People are to vote for lists with most of the candidates kept secret.

The urban insurgency is now entrenched in ten cities in central Iraq, including the northern city of Mosul with its 2 million people, and most of Baghdad with its 6 million. The roads leading to and from Baghdad are not safe for US forces and puppet government guards. There is the daily toll of the US military, with figures for the dead hiding the ten-fold figures for the injured. To keep up with losses or to escalate the conflict, the US and Britain are sending thousands more troops.

Most Iraqis expect more of the same: a steady expansion of the resistance and a gradual improvement in its coordination and ability to control whole areas. Many suspect the US will eventually attempt the de facto partitioning of Iraq that Henry Kissinger has lately called for. That would allow them to concentrate military forces on central Iraq while tolerating shaky alliances with puppet local regimes in the Kurdish areas and in the south. That will be a new phase in the struggle of the Iraqi people for independence. 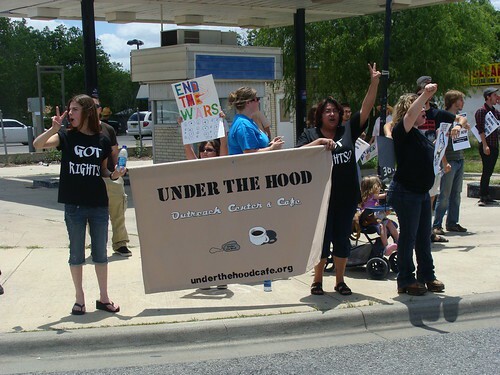 Fort Hood: Iraq and Afghanistan - the resurgence of anti-war cafes