Michael Griffin’s study of Islamic State is a useful book for anyone interested in its growth and impact on the Middle East.

Griffin tracks the development of ISIS from its origins in the US occupation of Iraq to the present, before “it disappeared behind the smokescreen of its own vicious celebrity”.

Griffin starts by comparing ISIS with the growth of the Taliban and al Qaeda stating, albeit vaguely, that all three organisations were, to some extent, a response to imperialism in the region.

At the same time the author makes some very important distinctions about ISIS that sets his book apart from its predecessors, the most fundamental being that it eclipsed al Qaeda as a threat to the West by focusing energies on building a caliphate — rather than the overthrow of any state.

Griffin also makes the point that compared to previous fundamentalist movements the ability of ISIS to financially manage the day to day running of the caliphate is a new development.

Griffin starts the book with an account of the atrocities and torture techniques that Iraqis were subjected to in the Abu Ghraib prison — rightly linking the “Shock and Awe” tactics employed by the American military in the 2003 invasion and ensuing occupation with the violence and barbarity used by ISIS today — note the orange Guantanamo jumpsuits that the beheaded victims were made to wear.

In this same vein the author also goes through the running of Camp Bucca, a camp in which prominent individuals from the ex-Baathist regime and insurgents from the 2004 Fallujah uprising were imprisoned.

He states that America “could control the perimeter but not what went on inside, the authorities relinquished control to an elite of ‘mayors’ or emirs… With tacit US approval, the emirs transformed Camp Bucca into a vast centre of indoctrination and training — ‘a Jihadi university’.”

Griffin seems to gloss over the main reason for the growth of ISIS — the sowing of sectarian divisions by the American military and the puppet government of prime minister Nouri al-Maliki.

The American presence backed the Islamic Dawa Party — a sectarian Shia organisation — to govern Iraq which made life qualitatively worse for the very large Sunni minority on top of the fact that religious organisations were able to fill the void left by the destruction of the Iraqi welfare state by American sanctions.

Therefore as Marxists we have to see the rise of ISIS as a warped and brutal reaction to the very real oppression Sunnis faced, overseen and encouraged by the American occupation.

Although Griffin’s study into the individuals behind the rise of ISIS is interesting, it fails to grasp the materialist basis for the growth of reactionary groups like ISIS. 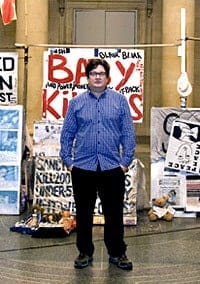