Islamophobia and the left in France

This article is over 5 years, 3 months old
By Jad Bouharoun
Downloading PDF. Please wait...
Tuesday 02 May 2017

I would like to thank John Mullen for reading my article “Rage against police racism rocks France” (March SR) and for taking the time to respond to it.

John is absolutely correct to point out that the question of Islamophobia is far from solved when it comes to the radical left in France; however, he is underestimating the substantial improvements that have been secured in recent years.

For instance, Poutou’s programme includes the repealing of the 2004 Islamophobic law that prevented young Muslim women from wearing the hijab in public schools. We must remember that at the time of the ban most of the radical left sided explicitly or implicitly with this racist law, and for years even the existence of Islamophobia was not acknowledged outside a tiny minority.

There are still contradictions, of course. For instance, within the space of a week Poutou said that one could wear the hijab and be a feminist, then declared that he nevertheless saw the hijab as a symbol for women’s oppression. Many NPA activists protested — publicly and internally — against the latter declaration.

But the main point I was trying to make in my article was that in spite of having improved its position on Islamophobia, the NPA remains unwilling to organise a national movement along with the main victims of this racist oppression.
The objective potential is there, as is shown by the frequent revolts and riots in the suburbs.

This is a political and organisational problem that goes beyond the specific issue of Islamophobia — even if it feeds back into it — and opens questions about the role of a revolutionary party in organising and coordinating a nationwide political intervention from below, be it on questions of racism, cuts or industrial action. 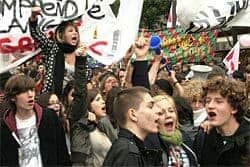 Mood is to resist

No taste for farmers' bull