It is important to vote

This article is over 12 years, 5 months old
I was struck by an obituary in the Guardian a few months ago. It was in the "Other Lives" section, where friends and family write in to celebrate the lives of people who were their own "local heroes".
By Lindsey German
Downloading PDF. Please wait...
Monday 01 February 2010

This man had lived in Plymouth, where he worked on the railways, went off to fight in the Second World War, then carried on working on the railways, was a member of Aslef, and a Labour councillor who became mayor.

Then in 2003 he left Labour because of the war in Iraq.

We’ve probably all met people like him in the last few years – people who have given their lives to the labour and trade union movement but who couldn’t stomach Tony Blair’s wars. Sometimes their personal breaking point wasn’t the war, but the growth in inequality, or attacks on education, or privatisation, or maybe just Peter Mandelson. Labour’s membership plummeted under Blair, as those who had spent their lives campaigning and organising resigned in disgust. Blair lost one million votes in 2005, generally assumed to be a result of the war.

The imminence of an election brings these questions back to the fore, especially an election when the Tories are tipped to win – a situation which simply didn’t apply in 2001 or 2005. Most on the left will look on it with less than enthusiasm, since the prospect seems to be either an out and out right wing party or the return of a pro-business Labour Party which has worsened markedly over the past two decades.

In a relatively small number of constituencies there will be the chance to vote for socialists and other left candidates. But regrettably there is not a left electoral force nationally capable of challenging Labour – that remains to be built in the future. What do you do in all the other constituencies? Clearly no one’s going to have much enthusiasm for Labour, but a lot of people will still vote for them nonetheless. Already there are signs from by-election results and opinion polls that there have been small shifts back to Labour. That sentiment will grow as the election comes nearer.

It will even affect some people who left Labour, or who said they will never vote Labour again. When faced with a choice between voting Labour and the Tories getting in, many will vote Labour. Labour will win millions of votes, mainly from working class people. The unions will use our subs to help campaign for a Labour vote.

There are lots of arguments about this. Some people argue that the Tories could not be any worse than Labour. That just isn’t true. Labour has done things that Margaret Thatcher and John Major didn’t dare do. But a Cameron government isn’t going to go back to 1997 and say, we’re going to reverse all these policies that Labour put into place. Instead it will say that Labour got away with privatisation, cuts and bailing out the bankers.

A Tory majority government can build on that by making deeper cuts, by helping the rich even more and by attacking the unions further. And it will have the blessing of its friends in the City, big business and the media, who like nothing better than a real Tory government.

They like it because it’s an openly pro-capitalist party. They also understand that a Tory victory represents a defeat for organised labour and for the more progressive attitudes in society, in favour of the more backward ones. Sometimes it is said that life would be better under the Tories because then workers would fight. That isn’t, for the most part, the history. Even when it is, militancy and anger are coupled with demoralisation from some sections of workers.

I first voted in 1970, one of a generation who were newly given the vote at 18. I voted Labour (without illusions, as we used to say in the 1970s) even though I had huge criticisms of Harold Wilson’s government. But we knew the difference between that and the Tories. My friends had managed to egg the Tory leader, Ted Heath, at a local meeting, which was much easier to do then. Everyone thought Labour would get back in and I can still remember my horror as we watched the results in the pub and saw a Tory victory. It took quite a while for the fightback to develop against Heath, and some of it failed, like the post strike in 1971.

It’s true that what matters most is the level of class struggle, not who wins elections. But who wins elections can help to shape that struggle and give confidence to the best militants. And it’s true that whether an individual votes or not, or how they vote, is not of huge importance in itself. But I believe it is important to vote, because it’s what our ancestors fought for (read Paul Foot’s book, The Vote, to find out how).

By doing everything we can to stop the Tories we best position ourselves as part of any fightback that comes, regardless of who forms the government.

Why it's time to realign the left 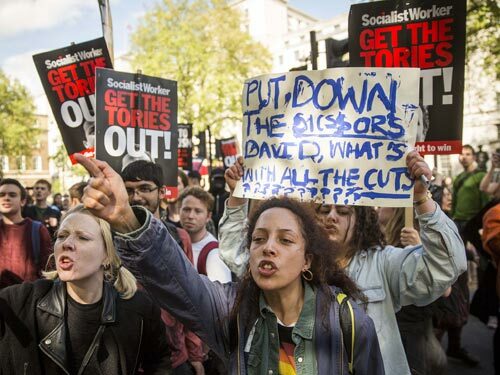