J is for Justice

This article is over 14 years, 2 months old
Bob Dylan's song "The Lonesome Death of Hattie Carroll" begins with words that are the cornerstone of justification for the justice system in model capitalist democracies.
By Pat Stack
Downloading PDF. Please wait...
Saturday 01 March 2008

“In the courtroom of honour, the judge pounded his gavel
To show that all’s equal and that the courts are on the level
And that the strings in the books ain’t pulled and persuaded
And that even the nobles get properly handled
Once that the cops have chased after and caught ’em
And that the ladder of law has no top and no bottom.”

The system, it is argued, is just, fair and equitable, and everybody is treated equally, tried by their peers having been given a fair hearing.

The legal system is just and in being so is a reflection of the system as a whole. After all, here is a system that can potentially allow anyone, regardless of how humble their origins to rise to the very top of society whether by earning great wealth, fame or political power.

Unlike previous societies your place in the world was not preordained by god or delineated by law.

Justice, then, in the narrower sense of the legal system and in the broader philosophical sense of society as a whole, was a hallmark of modern civilised and democratic capitalism.

So that was the theory. The reality, of course, is very different, not that that stops politicians or the media from howling loudly at any questioning of the system. The recent hysteria surrounding the remarks made by the Archbishop of Canterbury about sharia law is a good example of this.

Of course, that hysteria was mainly driven by the nasty Islamophobia that now seems to be regarded as perfectly respectable by all sections of the media, but it was also partly driven by an arrogant assumption that Western bourgeois justice is as good as it gets.

Don’t get me wrong, I am against any justice system being driven by any form of religion, but the truth is that there is much to question about our legal system.

After all, it is not that many years ago that there seemed to be an almost weekly acknowledgement by the establishment that there had been a miscarriage of justice by the British legal system.

Some were very high profile like the Birmingham Six, the Guildford Four, and Broadwater farm. There were also many less dramatic or well known examples.

Each, though, followed a similar pattern, media hysteria against the accused, police corruption, judicial connivance with that corruption, and a general atmosphere in which it would have been almost impossible for a jury not to convict.

Here was justice as a reflection of society as a whole. The strings were being pulled by the rich and powerful, the forces of the state, and the media. The accused, although innocent, were poor, without influence and power.

Why, though, should it be any different? For the system itself is inherently unjust. It is a system that overwhelmingly favours the haves against the have nots – the rich against the poor.

Even from birth, where infant mortality disproportionately affects the poor, the system is biased. Rich kids go to posh schools to ensure that they in turn will be well educated, rich and powerful.

They will enjoy better healthcare, live in a nicer environment and be less likely to be the victims of crime.

Just as the rich evade tax with rarely any comeback, the poor’s “crime” of benefit fraud is a constant source of moral outrage.

They will then enjoy luxury in a system whose very wealth is created in a totally unjust way.

For the wealth that is created, the services that are provided, the everyday functioning of that society will all depend on ordinary working people, who will be allowed a tiny portion of all they create back while a small minority will enjoy untold riches, benefiting from the labour of the many.

Of course, a few working class people will slip through the net and make themselves very wealthy. It is those few who allow the illusion of a just system in which we all have a stake. If that is true of life in general, then of course it will be true of the legal system.

Occasionally the fact that you can buy justice does hit the headlines. It is interesting that in the US the case that is always cited is O J Simpson’s. Much of the evidence against Simpson seemed very strong, but a predominantly black jury acquitted him.

Outrage followed: the US justice system wasn’t used to this. Don’t get me wrong – lots of very rich people had bought their way to freedom – it’s just they weren’t used to a black man doing it.

Which brings us back to Dylan. His apparent naivety about US law was not what it seems. For the verse at the beginning of this article was part of a story about a poor black waitress who was murdered by a rich white man (William Zanzinger), who smashed her head open for no apparent reason in a Baltimore hotel.

Having outlined how fair and impartial the US legal system is Dylan then proceeds to finish the tale of this trial:

“[The judge]stared at the person who killed for no reason
Who just happened to be feelin’ that way without warnin’.
And he spoke through his cloak, most deep and distinguished,
And handed out strongly, for penalty and repentance,
William Zanzinger with a six-month sentence.
Oh, but you who philosophise disgrace and criticise all fears,
Bury the rag deep in your face
For now’s the time for your tears.”

Such moments are just dramatic examples of the inherent injustice of the system laid bare. 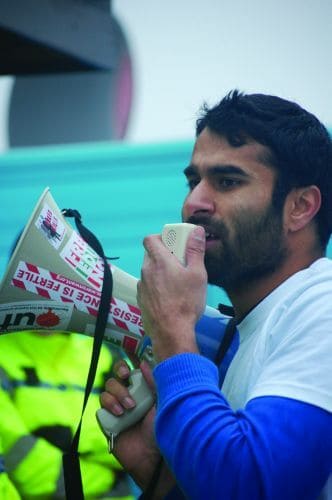