The Jerwood Gallery in Hastings opened its doors in March. On the edge of the historic fishing beach, this has been a controversial project. Jerwood paid the borough council nothing for the site and is exempted from council tax. Hopes for free entry were dashed when the gallery announced charges of £7 for the general public, £2 for locals.

Clad in dark ceramic tiles intended to mirror the black of their iconic neighbours, it remains to be seen how their gleam will withstand the onslaught of seagull droppings.

Inside natural light is everywhere. Windows frame views as varied and stunning as the pictures on the walls. The design certainly celebrates its environment and the eye is constantly drawn from the art to the scenery outside.

The large ground floor Foreshore Gallery houses the first major retrospective of the works of Kent-based artist Rosie Wylie. Wylie daubs paint on huge canvases in a simple style (cartoons like South Park come to mind). Silent Light, from her Film Notes series, was an obvious choice for the foyer, as the wooden houses could almost be green versions of the net huts just outside. Other paintings inspired by film, such as Kill Bill, are produced from memory after a single viewing. Pin Up and Porn Queen Jigsaw is interesting: a childlike image of a glamour model and a punter who is little more than a huge white eye.

The other rooms are intimate spaces with white walls and pale floorboards. They house a range of 20th and 21st century British art from the Jerwood Collection. Only the brilliant blue Delphinium, by previous Jerwood Painting Prize winner Katie Pratt, comes close to Wylie’s works in size.

Another ground floor room features abstract landscapes from the 1950s and 1960s. Upstairs Lowry’s The Canal Bridge sits next to Tristram Hillier’s Mill where a Bradford canal has a mirror-like surface that suggests the mill has ceased production. Sir Frank Brangwyn’s From my Window at Ditchling, The Churchyard, Rye, by Edward Burra, and a print, Brighton Pier, by Edward Bawden, supply some local flavour, while the seaside is referenced by Christopher Wood’s The Bather and Boat by Roger Hilton.

I enjoyed my visit, but how the decision to charge for entry will affect the gallery’s popularity compared with the nearby De la Warr and Eastbourne’s Towner, both free, only time will tell.

The exhibition of Rosie Wylie’s work is on until 1 July. 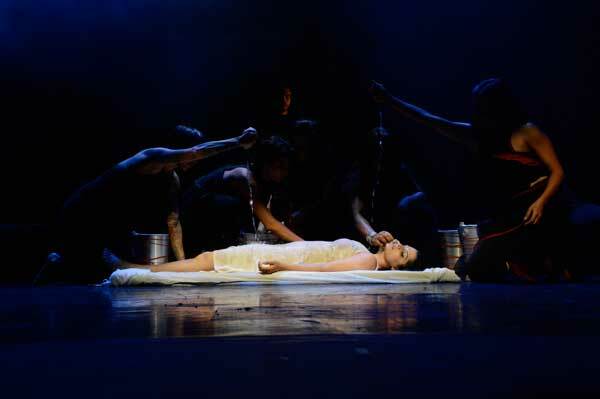 Anguish and artistry take centre stage at the Edinburgh Fringe