This article is over 7 years, 4 months old
One hundred a fifty years ago a meeting in London met to found the first international workers’ organisation, the International Working Men’s Association. Christian Høgsbjerg shows how Karl Marx made a vital contribution to the IWMA and how he fought to ensure its militant trajectory.
By Christian Høgsbjerg
Downloading PDF. Please wait...
Tuesday 02 September 2014

On 28 September 1864, 150 years ago, a mass meeting was held in St Martin’s Hall in central London to launch a new organisation, the “International Working Men’s Association” (IWMA). Composed of mainly trade unionists from London and Paris, it aimed to set up a political organisation that would audaciously aspire to forge a resistance to capital that would be as global as capitalism itself.

The mainly English and French militants had come together in London firstly to rally solidarity with the various international liberation struggles underway, including that for Polish independence, Italian unification and support for the North against the slave-owning South in the American Civil War. Their second reason for forming such an organisation was because in a recent economic downturn attempts had been made by employers to play English and French workers off against each other through the use of immigrant labour to try and break strikes. Trade unionists on both sides of the Channel wanted to counter this blatant “divide and rule” strategy.

Such a manifestation of international solidarity might not look particularly impressive from our 21st century perspective, where many socialists and trade unionists have the potential to communicate with and send messages of solidarity to striking workers the other side of the world in an instant. But in 1864 the formation of the IWMA signified something genuinely new and in a sense world-historic. It also reflected a growth in confidence among the European workers’ movement in the 1860s, with a slowly rising level of class struggle, and those in attendance represented small but significant real forces in Britain and France as well as Italy.

Their politics, inevitably, as in any real movement, ranged widely. Among the English supporters of the IWMA there were quite respectable and moderate trade union leaders, followers of the socialist Robert Owen (who opposed strikes) and former Chartists of varying vintage. The Italians present tended to be more revolutionary in their politics, but were essentially nationalists and partisans of Giuseppe Mazzini. Like the French followers of the anarchist Proudhon who were also present, Mazzini’s folowers were not particularly sympathetic to the idea of class struggle. Others looked to the peaceful utopian socialist visionaries Fourier and Cabet, while the supporters of the veteran French revolutionary August Blanqui equated revolution with simply fighting on the barricades.

Theory and practice
Yet remarkably it was Karl Marx, a marginal German émigré, who was at the time deeply engaged with serious research for what would become the first volume of his magnum opus, Capital, who would become the guiding spirit of this new organisation. At the IWMA launch it was decided to elect a 34-strong provisional organising committee, later known as the general council, and Marx became a representative of Germany.

There is a still popular myth that Marx was primarily simply a great thinker and philosopher who wrote great analytical works such as Capital without ever leaving archives and libraries. Yet as his lifelong collaborator Engels noted, Marx was “before all else a revolutionist” who had in the past like Engels been a leading member of the Communist League during the 1848-50 revolution in Germany.

When Marx now saw what he called “real workers’ leaders” moving towards the idea of international organisation, he threw himself into political activity. Marx’s research and discoveries in the process of writing Capital, for example his understanding of the historic and political significance of the struggle waged over the length of the working day, strengthened his work as an IWMA leader. Marx’s Capital in turn was shaped by his activism in the IWMA and was greatly appreciated by IWMA members when the first volume was published in 1867. The 1868 IWMA congress in Brussels passed a resolution noting that “Karl Marx has the inestimable merit of being the first economist to have subjected capital to a scientific analysis”.

As August Nimtz demonstrates in his book Marx and Engels: Their Contribution to the Democratic Breakthrough, by this time Marx had emerged as “the central force in the International Working Men’s Association — the first truly international proletarian organisation”, which grew to have representatives in the United States and virtually every West European country, as well as the French colonies of Algeria and Guadeloupe.

In 1864 Marx volunteered to help draft the rules and guiding principles of the IWMA in order to try and stamp it with what Hal Draper has called his revolutionary democratic ideas of “socialism from below”. The important new lesson that Marx and Engels had distilled from their experience of revolution and counter-revolution in Europe during 1848-51 was the necessity of building independent working class political organisation.

Yet Marx also understood that the prevailing mood of European workers in 1864 was very far from the heady days of 1848. As Marx drafted the IWMA’s “Inaugural Address”, he had to, as he explained to Engels, “frame the thing so that our view should appear in a form that would make it acceptable to the present outlook of the workers’ movement… It will take time before the revival of the movement allows the old boldness of language to be used. We must be ‘fortiter in re, suaviter in modo’ [strong in deed, mild in manner].”

For example, Marx wrote “the lords of land and the lords of capital will always use their political privileges for the defence and perpetuation of their economic monopolies…to conquer political power has therefore become the great duty of the working classes”. As David Fernbach has noted, Marx’s talk of the need for workers “to conquer political power” hinted at revolutionary politics, but was nonetheless “ambiguous enough, and the majority of the International’s English supporters undoubtedly interpreted it simply as winning the suffrage”, the struggle for the workers’ vote. Marx happily reported that his draft Inaugural Address was “adopted with great enthusiasm” by other IWMA leaders.

Marx fittingly ended the Inaugural Address by praising recent concrete examples of workers’ internationalism, including “the heroic resistance” by “the working classes of England” to the “criminal folly” of their rulers whose natural sympathies leant towards intervening on the side of the slave-owning South during the American Civil War. Despite the fact that Lancashire cotton textile workers might have materially benefited in the short term from lining up behind the cotton textile “lords of capital” on this question, instead of supporting British imperialism they waged a tremendous mass agitation in the early 1860s in support of the North. Marx stressed the importance of workers challenging the “criminal designs” of their own capitalist class, their “playing upon national prejudices, and squandering in piratical wars the people’s blood and treasure”.

Marx helped ensure the IWMA Provisional Rules remained flexible structurally to allow it to be open to the broadest layers of workers possible rather than — as Mazzini’s supporters wished — a detailed 40 rule programme. Challenging the Proudhonist current, Marx supported the involvement of women. In June 1867 Harriet Law was voted onto the general council and from this point on all addresses and declarations of the IWMA written by Marx no longer addressed “working men” but also “working women”. As Marx wrote to a German comrade, “great social revolutions are impossible without the feminine ferment. Social progress may be measured precisely by the social position of the fair sex.”

Internationalism
Above all, as Marx later recalled, “the International was founded in order to replace the socialist or semi-socialist sects by a real organisation of the working class for struggle”. Under his leadership, as well as passing resolutions supporting trade unions, the right to strike, the eight-hour day, and so on, the IWMA delivered meaningful and effective solidarity in practice to striking workers including Paris bronze workers, Geneva building workers and Belgian coal miners in Charleroi.

When tailors went on strike in Edinburgh and London in 1866 for example, the IWMA were able to prevent their masters bringing in strike-breakers from Europe and Germany. Without Marx’s leadership it is almost unthinkable that the IWMA would have developed in such a militant direction, making the impact it did, and going down in history as “the First International”. As John Molyneux observed in Marxism and the Party, the IWMA “was undoubtedly the most important practical political work of Marx’s life” and “it established the tradition of internationalism and of international organisation at the heart of the working class socialist movement”.

In the very beginning of the preamble to the Provisional Rules, Marx boldly stated his revolutionary democratic vision of how socialism would be achieved: “The emancipation of the working classes must be conquered by the working classes themselves.” Marx’s stress on workers’ self-emancipation was an explicit challenge to the elitist thinking then prevailing among many of the other socialist currents involved in the IWMA. These ranged from the “respectable” English trade union leaders who were open to the temptations of getting themselves elected to parliament as part of Gladstone’s “Lib-Lab” programme, to the more radical followers of Blanqui who looked back to the conspiratorial methods of the bourgeois Jacobins of the French Revolution rather than try and learn from the experience of workers in Paris since the 1840s.

But the idea of “workers’ self-emancipation” remained somewhat abstract until in 1871 the workers of Paris rose again in the world’s first workers’ revolution, forming the Paris Commune. Though it lasted just two months before being bloodily crushed, the Commune, as Marx noted in The Civil War in France saw “the proletariat for the first time [hold] political power… the political form at last discovered under which to work out the economical emancipation of labour”.

The slander heaped upon IWMA activists in Britain such as Marx who dared to stand in solidarity with the heroic Communards led English trade union leaders to break and run for cover, fatally weakening the organisation, which was ultimately wound up in 1876. Yet Marx’s revolutionary socialist politics, which he had fought for “strong in deed, mild in manner” within the IWMA, stood utterly vindicated by the workers of Paris who had “stormed heaven”, and in the Commune made “a new point of departure of world-historic importance”.

Why workers can change the world 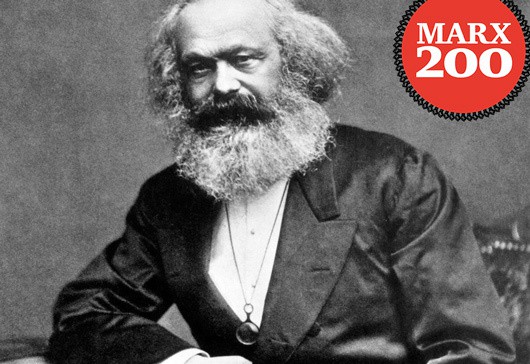 The enduring appeal of Marx 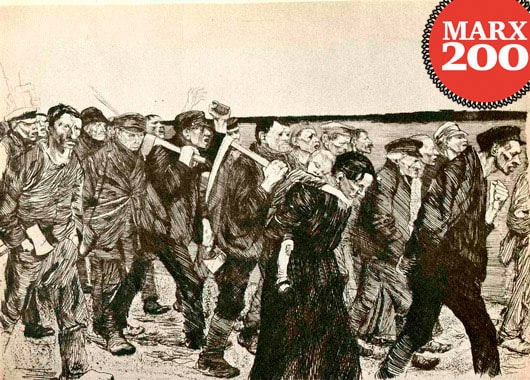 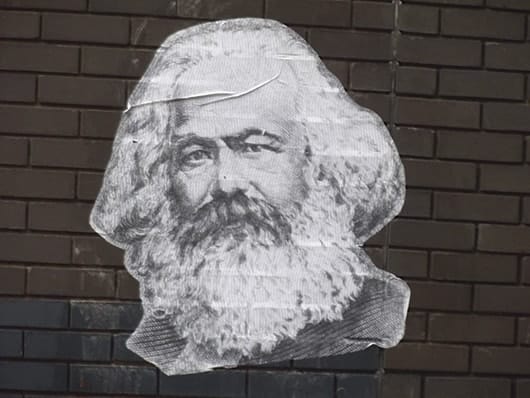 Interview: 'People are searching for ideas to explain the system'