This is a very peculiar film that pulls off something of an artistic coup.

It’s both an obsequious, servile, heritage heavy glorification of a recent British monarch and also a deeply critical study of the royal family and of monarchy in general.

It’s the story of how Albert Frederick Arthur George Saxe-Coburg-Gotha, who was born the Duke of York and died King George VI, struggled to lose his paralysing stammer – a handicap which in an age of mass communication made him a liability and an embarrassment to the royal family.

The film focuses on the relationship between “Bertie” and his unconventional, and hugely likeable, speech therapist, Lionel Logue. It follows their therapy sessions from their first meeting in 1925, on through the abdication crisis of 1936, climaxing with Bertie’s transformation into a “symbol of national resistance” (spelt out for us in large print on the screen so we’re in no doubt) at the outbreak of the Second World War.

The film builds to the dramatic climax of George VI’s first broadcast to the empire on the outbreak of the Second World War – an event, it is suggested, of such world historic significance that ultimate victory seems to hinge on whether he can deliver it without stammering.

However, the journey to this ludicrous climax will have many a monarchist squirming in their seat because the film firmly locates the origin of George VI’s stammer in his lonely and brutalised childhood. As a child, George VI was forced to wear painful callipers to straighten out his “knock-knees”, had anxiety related stomach problems and was left-handed until it was violently “corrected”. Philip Larkin famously argued in poetry that parents “fuck you up” – it seems that goes double if your parents are royalty.

The film portrays the British royal family as a deeply unpleasant bunch. George V, brilliantly played by Michael Gambon, is depicted as a domestic tyrant, feared by his children, and worried that “the firm” won’t survive the “proletarian abyss” opening on the continent in the wake of the Russian Revolution.

His queen, Mary, insists on following the protocols of formal dining even as her husband lies on his death bed. The film is also candid in depicting Edward VIII’s sympathy to Nazism, although there’s no mention that George’s Queen, Elizabeth (the future queen mother), had her own pre-war enthusiasm for Hitler.

Colin Firth puts in an outstanding performance as George VI. He does a brilliant job in evoking sympathy for the character and it takes effort to remember that it’s sympathy for the devil. The British monarchy played out its trivial little dramas against the background of the Great Depression, which threw 2.5 million out of work. In parts of the country unemployment was as high as 70 percent. But, outside of a few shots of extras in flat caps, George VI’s subjects are largely ignored.

They’re just there to listen to the king’s speech. 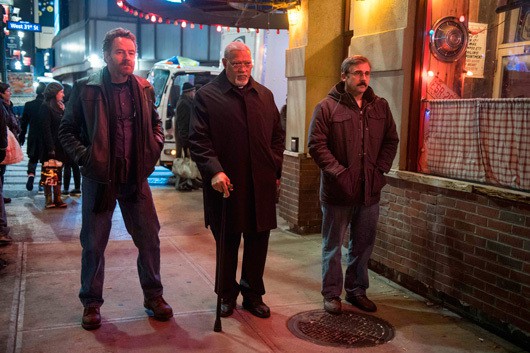