The current battle to lead the Labour Party stands in sharp contrast to the leadership contests in 2015 and 2016 when Jeremy Corbyn’s candidature electrified the campaigns.

Corbyn was both the most left wing Labour leader in history and the most popular with the party membership, which swelled to more than 500,000, making Labour the biggest political party in Europe at a time when Labour-type parties elsewhere in Europe are in crisis.

His victory in 2016 came despite two-thirds of the shadow cabinet resigning in an effort to bring him down.

Those leadership elections like the current one were fought under rules introduced by previous leader Ed Miliband to assuage the Labour right and mainstream media by reducing the trade union leaders’ influence and making it more difficult for a “left” candidate.

The contrast following Labour’s defeat in December is stark. The Guardian commentator John Harris noted in late January, “The chances of the leadership contest flaring into any kind of life seem remote. The default position is embodied by its two frontrunners, Keir Starmer and Rebecca Long-Bailey…trying to convey a sense of purpose while saying nothing much.”

The final contenders will be clear by 14 February when nominations close. The ballot will then run until 2 April and the winner be announced on 4 April.

It appears to be a three-way contest between shadow Brexit secretary Starmer, shadow business secretary Long-Bailey and MP for Wigan Lisa Nandy.

Emily Thornberry remained in the running as Socialist Review went to press but appeared to be struggling to win enough nominations. Media favourite Jess Phillips pulled out in late January recognising she stood no chance.

Long-Bailey is clearly the left wing candidate and has the backing of Momentum and Unite, making her the “Corbyn continuity” candidate — a term we might expect her to try to live down.

Starmer was the early front-runner, backed by more Labour MPs than his rivals and with the support of the Unison leadership. He appears the favourite among constituency parties and is favoured by media commentators over Long-Bailey, although Lisa Nandy has also attracted plenty of media support.

She came relatively late to the Labour Party, joining only in 2010. But elected MP in the safe seat of Salford and Eccles in 2015, she supported Corbyn for leader and joined Labour’s National Executive Committee as a Corbyn supporter. Long-Bailey remained loyal to Corbyn in 2016, helped draft the 2019 manifesto and, following the defeat, gave Corbyn “10/10” for his leadership.

Yet she has since declared Labour should be more “aspirational”, echoing a line of Tony Blair’s. She has talked of “progressive patriotism” and said she will “lay more stress on national security”. Long-Bailey has also signalled a break from Corbyn’s party apparatus, saying, “It’s important for me to have my own team.”

Starmer pushed hardest for Labour to back a second Brexit referendum, one of the reasons why Corbyn appeared so unclear on the issue. But he has been careful to signal he won’t wholly ditch “Corbynism” — arguing Labour should not “over-steer” away from manifesto policies.

Nandy, who has the support of the GMB union, was among those who resigned from the shadow cabinet in 2016 and she co-chaired the subsequent leadership challenge of Owen Smith.

It’s a mark of the disarray on the Labour left that the former Corbyn supporter Paul Mason now backs Starmer, arguing, “Keir is firmly on the left — albeit a different left than Corbyn/McDonnell.”

How much does the outcome matter? Socialists would obviously prefer a left wing Labour leader, but it would be a mistake to focus overly on the outcome.

Whoever wins, the pressure to tack to the right — to appear “respectable” and “electable” and to hold the party together — will be enormous.

Long-Bailey has already said enough to signal she may play a similar role to that of previous leaders from the left, such as Neil Kinnock in the 1980s.

What happens outside parliament will be what matters. 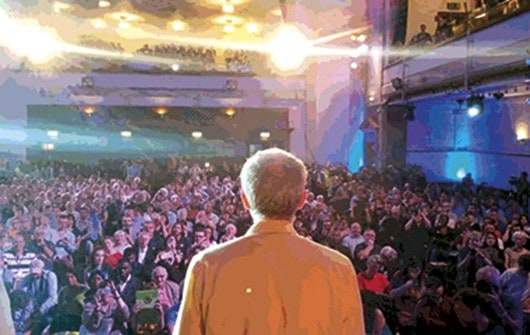 Here's why Corbyn can win