Lebanon – a War Within a War

This article is over 15 years, 4 months old
While the fighting in Lebanon was still raging, many analysts claimed that Hizbollah's modern weaponry and its utilisation of civilian spaces distinguished the war from any other.
By Neve Gordon
Downloading PDF. Please wait...
Friday 01 September 2006

Article after article mentioned the homes used as repositories for missiles, how the missiles were launched from village centres, and the way Hizbollah guerrillas, after firing the missiles, immediately blended back into the civilian population.

What struck me about these descriptions was that there was really nothing new about them, and that, in fact, most guerrilla warfare has been carried out in a similar manner. Even the pre-state Jewish paramilitary groups that attempted to drive the British out of Palestine operated in comparable ways.

In other words, what the newspapers described as a new phenomenon was actually old, and what in reality was truly new was totally elided. The Lebanon war was, in effect, a war within a war. Senior military planners at the Pentagon cast the conflict “as a localised example of America’s broader campaign against global terrorism”.

But what, one might ask, is so unique about the war on terrorism? In May 2004, Paul Hoffman, the chair of the international executive committee of Amnesty International, prepared a paper for Unesco’s World Forum on Human Rights, in which he eloquently explained the war’s distinctive characteristics. Shortly before the conference, Hoffman was informed that he would not be delivering the keynote address, as had originally been planned, because he had displeased the US delegation.

It is unclear which part of Hoffman’s paper the Bush administration considered so threatening, but one passage did stand out as extremely frightening. In it Hoffman underscores that “the war on terrorism exists in a parallel legal universe in which compliance with legal norms is a matter of executive grace… The concept of ‘terrorism’ put forward is any act perceived as a threat by those waging the war against it. The battlefield is the entire planet, regardless of borders and sovereignty… Human rights protections,” he concludes, “simply do not exist when they conflict with the imperatives of the war on terrorism.”

Although Hoffman goes on to discuss the “human rights free zones” engendered by this war, these features are by no means unique. Rather, the war on terrorism is historically distinctive, as Hoffman himself suggests, because its political, temporal and geographic borders are unbound and unknown – and it is fought against an enemy whose identity is ill-defined and therefore fluid. This is not a minor issue, and it should be remembered when analysing the war that just took place in Lebanon.

While Israel is certainly responsible for crimes perpetrated in Lebanon, the anti-war movement should really direct most of its energies towards replacing the leadership of the two countries that started the global war on terrorism – the US and Britain.

After all, it was not due to Israel’s warmongering, Hizbollah’s violent provocations or even Al Qaida’s horrific attacks that the human species sharing this planet has passed a threshold where there is no horizon beyond war. It was Bush and Blair who have produced this apocalyptic reality. 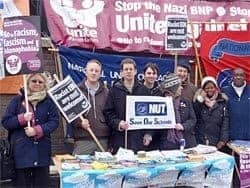