Life, Animated is an award-winning film adapted from a book of the same name by Ron Suskind about his son, Owen. Owen is a young man with Autism Spectrum Condition.

The film centres on the way that Owen’s lifelong special interest in Disney animated films has acted as a way for him to understand aspects of the neurotypical (non-autistic) world. It helps him to communicate and consider how other people might think differently from him.

His fascination is with the sidekicks, the support stars, the second on the bill. This makes sense as he is the younger sibling in the family, with a very charismatic, neurotypical brother. This detail illustrates the way many people on the spectrum think. I have seen time and again the way that special interests work for autistic people.

The film does a brilliant job of allowing us a glimpse of how, for Owen, Disney animations help make sense of a chaotic world. Of course, it presents some problems.

He falls in love, for example, and things don’t end happily ever after. Disney has left him completely unprepared for the pain of breaking up — just as it has when his brother tries to talk to him about sex and he has no conception of anything more passionate than a kiss.

Nevertheless, I was disappointed by the film in two ways. The first and least important is that, despite featuring passages of beautiful animation, the film doesn’t go further visually and aurally to explore some of the sensory differences autistic people experience.

My other criticism is more structural. Suskind is a famous American journalist. He more commonly writes about politics and has won a Pulitzer prize. This means that we see Owen growing up in a very comfortable environment. We learn that Owen has seven therapists who help him with all aspects of living with autism, all of whom work with him one-to-one on a daily basis. His progress is, of course, dramatic.

But there is no reference in the film to the brutal treatment of children with autism who do not have the kind of parents who can afford to employ such an array of therapists. Parents often lose the right to any therapy for their kids if their medical insurance changes, or have to sell their homes or give up work to move to states that are better funded.

Many end up medicating their children, especially as they get older, in order to deal with violent meltdowns because they cannot afford the therapies and equipment that would enable their child to communicate, preventing their frustration getting out of control.

Suskind is a liberal, and the family clearly love Owen to bits. They are accepting of his autism as something fundamental to his identity. Unlike many families, particularly in the US, they are not using behaviourist methods to train the things that make Owen look autistic out of him.

However, I think given the opportunity this film presents the film’s makers could have been more critical of a healthcare and education system that leaves the poor high and dry and denies children the opportunities Owen has had. 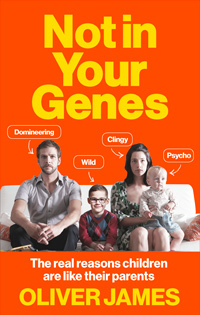 Not in Your Genes