The crowd pauses at the luxury skyscraper, breaks through the glass facade and proceeds towards the wealthy inhabitants. A yuppie gulps, ‘We’re fucked,’ as the zombies approach and literally eat the rich. Land of the Dead came out after this book was written, but it fits the premise perfectly – that Hollywood is radicalising and using the imagery of Seattle and 15 February.

Hollywood’s New Radicalism appraises the politics of the last 25 years of US films – The Matrix is ‘confused’, Fight Club uses an anti-capitalist aesthetic but escapes commitment, Forrest Gump is a right wing evangelical. But, even when the ‘VH1-Rumsfeld connection’ of pro-Bush corporations has colonised film production, it is remarkable how much dissent is emerging. A-list films like American Beauty, Three Kings, Bulworth and Erin Brokovich criticise the family, military, government and corporations, while most strikingly, the tale of Communist actors Cradle Will Rock and the explosive Fahrenheit 9/11 have been subjects of protest themselves.

This militancy hasn’t come from nowhere – artists are taking part themselves. Who can forget Michael Moore’s Oscars speech on the outbreak of war, Sean Penn’s the following year, or Tim Robbins’s extraordinary tussle over free speech with the American Baseball Association? Under Reagan, big names risked the sack for speaking out, and the ‘Friends of Bill’ sidetracked a generation in the early Clinton years. But recently a whole host of stars have returned to protest, supporting Ralph Nader’s anti-corporate 2000 election bid and, most importantly of all, the riots that shut down the 1999 World Trade Organisation in Seattle. As well as providing an early victory for the anti-capitalist movement, this provided new material for Hollywood radicals to work from.

Yet although US politicians mould themselves on movie stars (Reagan and Schwarzenegger even cut out the middleman), celebrity politics have a central weakness. With Act Now to Stop War and End Racism, MoveOn and Artists United for a Win Without War among the celebrity-endorsed protest groups, one is left wondering how the government of a country so enthralled by stardom ever managed to wage war in Iraq. Because they are not linked to workers’ struggle, American celebrities flip between a formless ‘movement’ and their love/hate obsession with the Democrats. Dickenson asserts that the celebrities who backed Kerry were doing so without illusions, but the fact remains that the left are only now recovering from their mistaken strategy.

Even mainstream Hollywood provides an outlet for frustration as well as accommodation to society – The American Dream itself criticises bureaucracies and corporations, but the hero escapes by getting the girl and a nice house. Films, as creative products, never contain one simple ‘message’, and instead sustain contradictions. So in Ben Dickenson’s view, Wall Street was adopted by the very yuppies it parodied because it failed to offer a collective alternative, but one can also claim that anti-hero Gordon Gecko is the highly glamorised dynamo of the plot that aims to satirise him. While Naked Gun 2 is criticised for imperialism when Lieutenant Drebin beats up Saddam Hussein and Colonel Gaddafi, some of the laughter can also be seen to land on the US’s pretensions to ‘world policeman’.

Dickenson’s book gives an activist’s-eye view of the issues, with a wealth of interviews and a survey of reviews and articles. For anyone who has wanted Socialist Worker‘s film reviews to be lengthened into a 200-page book, this is just what you’ve been waiting for. 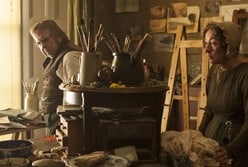 When an Oasis Becomes a Blur