This article is over 17 years, 1 months old
Is it time (to paraphrase Brecht) to elect a new American people?
By Mike Davis
Downloading PDF. Please wait...
Wednesday 01 December 2004

American liberals usually profess great enthusiasm for the common people. But sentimental populism took a hard blow on 2 November. The people, by a slim but decisive majority, elected fear, deception and greed to four more years in the White House. Indeed, with the exception of the Democratic redoubt on the Great Lakes, continental America, from Idaho to Alabama, has become a one-party nation under god. Not even Bruce Springsteen and 48 Nobel laureates could ultimately swing Ohio to John Kerry. Bush dramatically increased his 2000 margin of victory in 12 states, while Kerry earned less than Gore in seven states, including his own Massachusetts.

Bush, as a result, claims a popular ‘mandate’ to reshape America according to the whispered instructions of god and Karl Rove. ‘I have earned capital in this election,’ he immediately threatened, ‘and now I intend to spend it.’ Indeed, the decisions and judicial appointments that he will make over the next year or two will probably define the US for a generation or more.

The judicial system will continue its inexorable march rightwards towards that great day when abortion rights are rescinded. Business groups, who reportedly invested more than $1 billion in Republican campaigns, will be able to drill for oil in wildlife preserves and reap the profits of the privatisation of social security.

More Sunni cities will be pounded into rubble while triumphant neoconservatives push for joint US-Israeli air strikes against Iran. Nuclear testing will resume in Nevada and glaciers will continue to melt in Alaska.

Not surprisingly, there is fear and loathing on both Democratic coasts at the prospect of this Republican revolution. In San Francisco bumper stickers already urge secession. Manhattan recoils from the hegemony of the heartland. There is also much talk about the ‘return of the 1920s’, when an alienated intelligentsia chose real or figurative exile from a conservative society dominated by business reactionaries and sleazy evangelists. A profound fear of middle America now colours perceptions of the future.

The most popular liberal paradigm for understanding the election debacle is the belief that plain folks – like in Germany in 1933 – have been hypnotised by appeals to their prejudices and cultural backwardness in a triumph of ignorance.

This line of analysis (a gloss on Marx’s concept of ‘false consciousness’) was seemingly confirmed by exit polls in Ohio that indicated that ‘moral values’ were a more urgent concern to swing voters than closed factories or the invasion of Iraq. In fact Bush’s brain, Karl Rove, had ensured that amendments outlawing gay marriage were on the ballot in 11 key states, including Ohio. No issue was as likely to galvanise traditionalist and evangelical voters, including many otherwise Democratic Latinos and blacks. But it would be incredibly simplistic to think that cynical political operatives can simply push buttons labelled ‘abortion’ or ‘gay rights’ and immediately cancel the political impacts of poverty, job loss or catastrophic illness.

Take the gritty mountain state of West Virginia, for example. No state has undergone a more dramatic rightward shift in its presidential vote. A bastion of the powerful steel and mine workers’ unions, West Virginia was famously loyal to the national Democrats in such dismal elections as 1956, 1968 and 1988. Yet last week Kerry lost West Virginia by a shockingly large margin (13 percent). There is no doubt that Republicans made big gains in the hundreds of smalltown churches where pious West Virginians still cast out Satan and fret about the legalisation of sodomy. But for the ‘false consciousness’ theory to fully apply, West Virginians (or Kansans or Ohioans) must have had the opportunity to make a choice between ‘values’ and ‘interests’, culture and class.

In fact it is precisely the absence of such a choice that defines current American politics. In West Virginia, for example, the national Democrats had almost nothing to say about the decline of the Appalachian coal industry or the loss of local factory jobs to Mexico or China.

The great achievement of the Clinton era was to realign the Democrats as the party of ‘new economy’, of the bicoastal knowledge industries and high-tech exporters. Instead of an economic rescue package for the heartland as demanded by the industrial unions, Clinton rammed through the job-exporting North American Free Trade Agreement (Nafta).

Kerry campaigned on that legacy. Like Gore, he was heavily funded by the entertainment, software and venture capital industries. And, also like Gore, he campaigned without a compelling economic message or serious proposals to stem further loss of industrial jobs. At the most, he promised modest tax breaks for corporations that kept jobs at home. Bush, on the other hand, had imposed temporary tariffs on imported steel in 2001. The tariff was undoubtedly a cynical Rove-inspired tactic to capture blue collar Democrats, but it worked.

From a West Virginia standpoint, the Texas cowboy had the guts to stand up to European competitors, while Kerry offered little more than aspirin for terminal cancer. Bush was perceived (however incorrectly) as an economic nationalist while Kerry was tarred as an untrustworthy Europhile.

The real Achilles’ heel of the Democrats, in other words, is the economy, not morality. The biggest ‘wedge issue’ in the coal and steel valleys is industrial decline, not the threat of gay monogamy. With union halls shut down and the independent press extinct, it is not surprising that they search for answers in their churches or from demagogues on the radio, or that they equate the decay of employment security with the decay of ‘family values’.

Before they emigrate to Toronto or bunker down in their ivory towers, American liberals should reflect long and hard on the historical circumstances that have turned yesterday’s working class heroes into today’s barbarians at the gate.

When the Gringos Go Down South 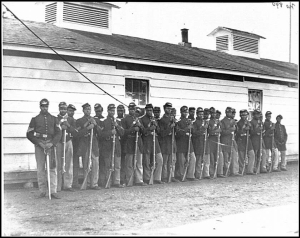 The war that became a revolution