This article is over 15 years, 8 months old
Review of 'The Devil and Daniel Johnston', director: Jeff Feuerzig
By Jane Trainer
Downloading PDF. Please wait...
Monday 01 May 2006

Winner of the Director’s Award at the 2005 Sundance Film Festival, The Devil and Daniel Johnston tells the story of singer/songwriter Daniel Johnston. Johnston, who is now 45 years old, began drawing cartoons and writing songs in the 1970s.

The film draws on audio tape recordings he made throughout his childhood, documenting arguments with his Christian fundamentalist mother and conversations with himself. The lyrics of his songs draw on unrequited love for a woman who went on to marry a funeral director, and other sad, sorry situations he found himself in. The depressive nature of his songs may be explained when later in life he was diagnosed with a severe bi-polar condition provoking violent mood swings.

Johnston’s catalogue of songs has been covered by the likes of Tom Waits, The Flaming Lips and Beck. He gained a cult following between numerous hospitalisations when he managed to make an impact on the Austin, Texas folk music scene playing in clubs and bars and recording his songs on tapes, which he distributed freely. His highest exposure came when Kurt Cobain was seen, in the early 1990s, in a T-shirt which Johnston had designed.

This film takes us on the journey of Johnston’s life so far, through an adolescence in which he was repeatedly told that he wasn’t worth anything if he didn’t contribute to society by getting a proper job. After a spell at McDonald’s and Astro World, where he was separated from his piano, he ran off to join a carnival.

Friends, family and music management types fill in the details of Johnston’s life, combined with home movie footage. Scenes in the film made me slightly uncomfortable. A section devoted to the importance of the combination between madness and genius, did not sit well with some of the anecdotes about violent episodes. On occasions, he hit his friend over the head with a metal bar and once chased an elderly woman out of her house leading her to jump out of her second floor window and break both her ankles. These episodes were, I felt, almost supposed to be funny.

The result of a trip to New York with indie band Sonic Youth made for some interesting footage and Johnston was in his element. However during these periods he would be tempted to avoid taking his medication, believing it would improve his performances. An increasing obsession with Satan led to more troubled times and he was once sent home on a bus on his own, then went missing, much to the distress of his family.

Bizarre episodes like this continue throughout the film and result in some uneasy viewing, particularly on the occasion where he took the controls of his father’s small plane and brought it spiralling to the ground. Somehow they both walk away unhurt. The retelling of this incident leads his father to break down in tears.

Feuerzig believes that Johnston exploited his own illness through writing songs like “I’m Having A Nervous Breakdown” and argues that his condition allowed his ideas to go “straight from his brain to the paper or piano”. This I find tricky because I just don’t get the music and I can’t understand the comparisons made with Bob Dylan or The Beatles.

This film left me feeling confused about various things. Were people exploiting Johnston for some kooky publicity and a record deal (which eventually came but was dissolved after only 6,000 album sales), or was it their fascination with a “mad genius” that enabled him to continue to do what he loves?

Voices of A People’s History Of The United States CD 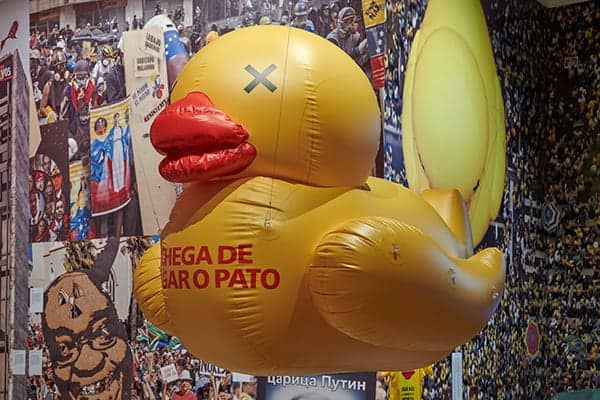 Hope to Nope at the Design Museum—graphics overload without context