Making the case for left unity

This article is over 8 years, 2 months old
The Left Unity initiative has attracted significant interest and a founding conference is taking place at the end of November. Socialist Review invited Andrew Burgin, a supporter, to put the case for why the left needs a new party.
By Andrew Burgin
Downloading PDF. Please wait...
Friday 01 November 2013

On 30 November a new party of the working class will be launched in Britain. There is little disagreement among socialists that such a party is necessary. What will be its aims and what will be its chances of success?

A year ago, following the 14 November action across Europe which drew more than 10 million workers into common action against austerity, a small number of comrades initiated a Left Unity statement which called for a discussion about the way forward for the left. Ken Loach contacted this group and in March we launched his appeal for a discussion towards a new party of the left. More than 10,000 people have now signed Ken’s appeal and on 30 November hundreds will attend a conference in London to lay the foundations for the new party.

Of course there are many existing socialist parties and there have been previous attempts to create a broad party of the left. And many understandably query how this project will be any different or more successful. Others ask why we don’t just engage with the strategy of the largest trade union in this country, Unite, which is to reclaim the Labour Party for the working class.

It has proved hard for many to break with Labour, and the reasons which have bound many to it are understandable: its creation by the trade union movement; its adoption in 1918 of Clause 4 calling for common ownership of the means of production, distribution and exchange; its partial nationalisation of industry following the Second World War when the radicalisation of the working class in the immediate post-war period swept it to power; its creation of the welfare state with significant gains in health, welfare, housing and education.

But those justifications now exist only in history. Labour long ago abandoned Clause 4. The gains for the working class which Labour assisted have been in a process of reversal for over 30 years, initially at the hands of Thatcher, but Labour has been – and is – active and complicit in the dismantling of the welfare state and the weakening of working class power. In over 13 years in office, from 1997 to 2010, it did not repeal Thatcher’s anti trade union laws and it continued her work of privatising essential services, laying the ground for the wholesale destruction of the NHS which is now happening.

And it has offered no alternative to the neoliberal narrative of austerity: indeed, it has embraced it. Labour has effectively sided with the Conservatives, backing the cuts agenda in the ideological battle following the banking meltdown of 2008.

Those on the left who still invest their hopes in the Labour Party have expected much from Ed Miliband. But his leftward shift has been confined to promises to repeal the bedroom tax and a temporary freezing of energy bills. And although Labour conferences vote repeatedly to renationalise rail and other industries nobody expects a Labour government to act on this. But what has been promised by the Labour leadership is a re-examination of the union-party link. A special conference next spring may well see a definite break between Labour and the unions.

The election of a Labour government in 2015 promises nothing for the working class. It will be a government committed to continuing the austerity policies of the Tories with even more draconian measures aimed at the unemployed and an intensification of anti-immigration policies as they seek to win Tory voters.

Of course, Britain is not the only country where a social democratic party has embraced neoliberalism and trampled on the interests of its traditional class base. It has happened across Europe. Yet throughout Europe new parties of the left have emerged, representing the interests of the working class. As yet Britain is an exception to this trend. Their social base largely comes from the left of the Communist parties, working with parts of the revolutionary left, and from splits from social democracy as in the case of Melenchon in France and Lafontaine in Germany. They have had considerable electoral success. In Greece Syriza is the main party of opposition in the Greek parliament and, importantly, has become increasingly influential in the social solidarity struggles within local communities.

The political basis for all these new parties is opposition to capitalism and war. It is the recognition that maintaining the basic means of existence for the working class necessitates the ending of an economic system devoted to profit and its replacement by one which is driven by the fulfilment of human needs. They are parties which understand that there is no possibility of reforming capitalism and which recognise that the transition to the new society we seek will be mediated through the struggles to defend and extend the existing gains of the working class.

The party that Left Unity becomes will seek to unite within its ranks all those who oppose austerity and recognise that both an economic and a political alternative are necessary. The revolutionary wave which began in 1968 has receded and the neoliberal offensive that was launched to deal with the economic crisis of the 1970s and which gained pace in the wake of the collapse of the Soviet Union has broken the back of the traditional organisations of the working class. Far left-parties such as the SWP, despite important work in the anti-war movement and against fascism, have been unable to fill the political vacuum left by rightward moving social democracy.

There is no possibility of pressurising the Labour Party into becoming the party which can answer the needs of the working class – it is explicitly committed to sustaining the current economic and social system: a system which is racked by perpetual crisis and whose continuation requires a permanent war against the working class. As the billionaire US investor Warren Buffett puts it, “There’s class warfare all right but it’s my class, the rich class, that’s making war and we’re winning.”

The Grangemouth debacle is the canary in the mine which shows how dangerous the situation is for the working class and for organised labour. Unite is the largest union in Britain and has been seen as an enormously powerful organisation. However, it has been forced by the employer, who closed the petrochemical plant and threatened complete closure, to agree to a humiliating deal which included the ending of the workers’ pension rights, the end to on-site union representation, a no-strike deal and a new wages structure. The role the Labour Party played was to make sure, in the words of Ed Miliband, that Unite “fully understands the gravity of the situation”.

The workers there were relieved that the plant was kept open but many must now doubt the value of paying their union dues. The cost of this defeat at Grangemouth is enormous for the working class movement as a whole. It heralds a further offensive by the ruling class against the trade unions.

We cannot continue with the assumptions and expectations of the past, whether invested in Labour or the political potential of the trade union movement. There is a new reality which has to be faced up to. We need a political party which is dedicated to securing the interests of the working class and the poor and which fights with as much commitment and determination as that shown by those who fight to advance the interests of capital.

The Founding Conference of Left Unity will take place on 30 November 2013 at the Royal National Hotel in Bedford Way, London WC1H 0DG
The initial Left Unity statement can be found here, and Ken Loach’s appeal for a new left party is available here.

Respect: Look to the Future 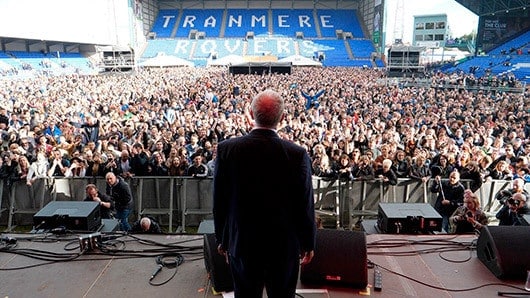 One nation under Labour?