Tate Modern, London, until 26 October
The curators at Tate Modern have assembled, quite simply, a magnificent exhibition. Kazimir Malevich was born near Kiev in 1879. He died in 1935 after being diagnosed with cancer while imprisoned in one of Stalin’s camps. Throughout his adult life he was a revolutionary artist, an innovator and teacher.

Malevich arrived in Moscow to study art a year before the Revolution of 1905. He was one of a young generation of artists who, at the beginning of the 20th century, found themselves locked out of the Russian Academy, out of mainstream artistic life, and in revolt against the stupefying dead hand of Tsarism.

Malevich was influenced by modern artists in Western Europe, first Cézanne and then the Cubists. He began to create particularly Russian forms, bringing to his work the “peasant” art tradition. The subject at the heart of all his painting is rooted in the life of Russian working people. His Cubist work is breathtaking. It is as if he mastered Cubism and then discarded it, came to Futurism and left it behind.

In 1914, at the start of the war, he suddenly stopped work on a small canvas and covered over the surface with black. This was Malevich’s first black rectangle on a white background. It was his rejection of an art tradition that had brought the world to war. From this point his work explored abstraction. He jettisoned the idea of perspective and narrative. He began to explore the interchange of shapes and their position in the space determined by the canvas.

These works are as stunning and innovative today as they were during the war years in Russia. Free from the restraints of Western art structures he produced an alarming amount of work. This period was marked by the iconic Black Square — an artistic black hole through which Malevich travelled immediately before the Revolution of 1917. Here his work transformed from a black square to a white one — light out of dark.

In the following years of civil war and immense hardship Malevich was a teacher in state art schools, instructing others in his method and his findings about colour and space. Suddenly the exhibition space is filled with other artists. It is a collectivisation of art. On the wall alongside Malevich are El Lissitsky and Lyubov Popova among other giants of Suprematism.

The exhibition follows the years of counter-revolution and the bureaucracy’s attack on the avant-guard. Malevich was isolated, his school closed. He left abstraction to return to a form of figurative painting. But the works were subversive. They were not what Stalin wanted. Then he shifted to a kind of socialist realism. But again he fought, and was sent to prison. The paintings become tragic.

One of the final paintings is a portrait of a shock worker of the revolution. His face is devoid of colour: a corpse. The revolution is over. The final self-portrait is Malevich dressed as the master of colour and form. At his funeral hundreds of mourners wore a black square pinned to their collars. See this exhibition if you can. 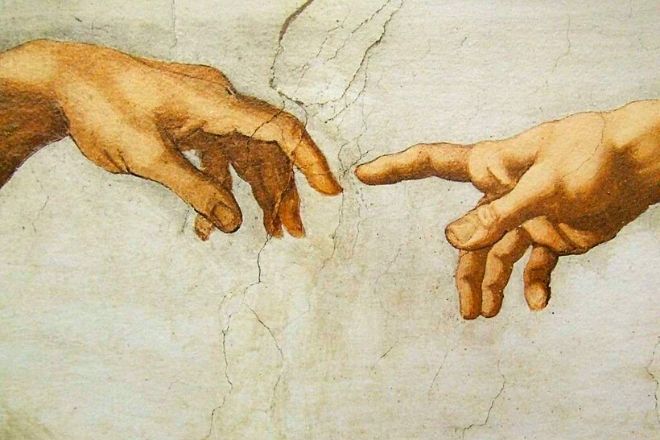