Almost 50 years ago, the teenage Martin Parr came up north to Manchester Polytechnic where he learnt his trade as a photographer, shooting in black and white. He looked for people, often managing to get close to them. He hung out in the city centre, Piccadilly Gardens, where he found young couples and fans of the Osmonds willing to pose for him. He explored every Yates’ Wine Lodge in the area on weekday dinner times, often rather sad places.

He walked around Moss Side before it was flattened by bulldozers. He watched others drink and dance and got invited inside people’s homes to take pictures of their families as they sat round the fire. He spent time in places most people never saw, such as the wards at Prestwich mental hospital, where he photographed patients and staff.

His course finished and he soon moved away, coming back every so often, recording the changes, the disappearing world of small shops being replaced by the supermarket. At some point in the 80s he abandoned black and white. From now on he shot only in colour. So this exhibition is sharply divided. It’s almost as if Manchester changed to being a more colourful place.

Of course it didn’t. The 80s was an awful decade as battles were fought to defend tens of thousands of jobs as the oldest industrial city in the world was de-industrialised. Twenty years later Manchester had become New Labour’s favorite city. A model neoliberal city emerged. Today’s skyline shows dozens of cranes, new office towers and blocks of flats, not one “affordable”. Yet it is the second worst local authority in Britain for child poverty.

Parr never found his way to a picket line or a tenants’ meeting. He was never going to upset the great and the good. Their failures, from the concrete housing monstrosities of the 1960s and 70s, to today’s homeless amid glass and steel palaces are all but absent.

This is a huge exhibition with hundreds of pictures, mostly in colour, some wonderfully large, yet much is missing. Parr tells us he has always been interested in decoration. He gives us lots of clothes, hats, and tattoos. They are often fun to look at but Parr seems content to leave investigating what lies underneath to others.

He gives us an everyday, conventional Manchester. If there’s a theme it’s the continuities and changes. We see both St Patrick’s Day Parade and Gay Pride. Parr is always sympathetic to his subjects. He likes a joke as with the kid left in a buggy outside a betting shop. This is an exhibition whose more contemporary half is designed to entertain, not to ask questions.

There’s much more to Manchester than this, not least the city of the late Mark E Smith, who sang, “They cheat the kids, I cry for them, I cry for me, I cry for thee.”

Jeremy Corbyn and the Strange Rebirth of Labour England 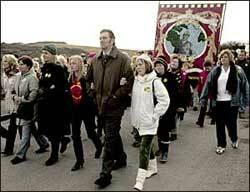 Faith: betrayal and survival during the miners’strike