Mass revolt against poverty in Bolivia

This article is over 11 years, 4 months old
The streets of the city of Potosí, 600 kilometres south east of the capital, La Paz, are desolate, distended with the uncollected garbage of 18 days of general strike and popular revolt against poverty.
By Jeffery R Webber
Downloading PDF. Please wait...
Wednesday 01 September 2010

Stores are closed and public and private institutions boarded up, along with schools, markets, and banks. Cash machines are out of money, supplies of food and fuel are low, and inflation is lifting the prices of remaining basic commodities into the clouds. Only vehicles authorised by Potosí’s Civic Committee are permitted to navigate the streets.

Roughly 500 blue tent stations are scattered in different locales, providing shelter for possibly 1,000 people on hunger strike. The include the governor, a member of the ruling party, Movement towards Socialism (MAS), who has temporarily broken ranks under grassroots pressure. Two MAS congress members also joined the hunger strike initially, but were then successfully pressured into abandoning that route by higher-ups in the party.

In recent days over 100,000 people have taken to the streets. Peasants from nearby Jatun Ayllu Yura (an independent indigenous community) physically occupied the hydroelectrical station that supplies power to the biggest mine in the country, San Cristóbal, run by a Japanese multinational, and the site of major worker and peasant disputes earlier this year.

The favoured government tactic has been to exhaust the strike by ignoring it, but this has seemed only to radicalise and broaden the base of support for Potosí’s militancy around six principal, immediate demands: 1. The resolution of department borders between Potosí and Oruro, particularly around the mountain of Tahua, rich in the rock base used for cement production; 2. The immediate installation of a promised cement factory in the community of Coroma to create jobs; 3. The reopening of a metal processing plant in Karachipampa; 4. The structural preservation of the over-mined Cerro Rico (the massive, historically and symbolically crucial mountain that towers over the city of Potosí); 5. The construction of an international airport in the department to attract tourism; and 6. The completion of promised highways.

So we’re dealing with the poorest department in the country (life expectancy is dramatically below the national average), which gave roughly 80 percent support to the MAS in the last elections, rising up in a protest against neoliberal continuity and the failure of basic responses to endemic poverty.

The crux of the situation is that the mining regime that prevails in Potosí, as elsewhere in the country, is fundamentally neoliberal, and that this is a MAS strategy, not a deviation from their plan or a distortion by disgruntled state bureaucrats.

Negotiations have now started with the government in Potosí. But it’s hard to exaggerate the significance of this break with the MAS and the ways in which the government’s populism will be unable to contain the growing discontent from urban and rural popular classes. These fractures between the popular sectors and a government that continues to insist it represents them are very distinct phenomena from the frequent right wing destabilisation campaigns in the last few years.

While committed to the defence of the Morales administration against destabilisation campaigns from the domestic right and various imperialist forces, these popular currents are also beginning to believe that the break with neoliberalism introduced in recent years has been exaggerated by the Morales administration. Rather than waiting for transformative change to come from on high, the new struggles are reclaiming agency rooted in the struggles of the exploited and oppressed themselves, working independently from the MAS.

The ability of Morales to play the distant saviour, to reduce recurrent instability to mere manifestations of internal party problems, “bad-apple” ministers, disloyal bureaucrats and social movements manipulated by nefarious CIA and NGO agents, is losing plausibility rapidly among the population. As much as he deigns to, Morales cannot stand above the class struggle and inherent contradictions in the capitalist development model to which his government has wedded itself.

Unless the Morales government takes the unlikely turn towards abandoning its bourgeois alliances and committing itself to the authentic anti-capitalist and indigenous-liberationist demands of the popular revolts of the 2000-2005 insurrectionary cycle, the Potosí uprising is likely to be just the beginning of things to come.

Jeffery R Webber teaches politics at the University of Regina, Canada. He is author of Red October: Left-Indigenous Struggles in Modern Bolivia (2010) and is currently in La Paz, Bolivia 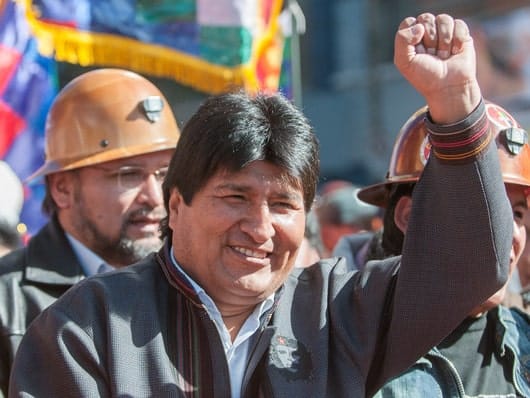