The Men Who Stare at Goats

Imagine Jeff Bridges reprising his Big Lebowski role but as the New Age pioneer of a secret US army unit that experiments in psychic warfare. With him come George Clooney and Kevin Spacey as his light and dark Jedi pupils, and Ewan McGregor as the down-on-his-luck nobody who stumbles across them in his desperate bid to be a war reporter. Now you’ve got an idea of the pitch for The Men Who Stare at Goats. This is a satire, and a very funny one, of US delusions in Iraq.

Whereas a film like Oliver Stone’s W gives its target a tragic weight he does not merit, this film dispenses with granting any credence to the grandiosity of the last US president in the opening credits to move straight into the comically failed endeavours of Middle East adventurism.

The film adapts Jon Ronson’s book of the same name, and given the ludicrous fantasies belonging to the US military mindset one can readily accept the opening claim that “more of this is true than you would believe”. Certainly the US credulousness about their own spin, the faith that foreign affairs conform to the lessons taught by Hollywood movies, is currently being played out in several parts of the world with all too tragic results.

The film proceeds with a fast-moving lightness of touch. Spacey’s dedication to using his psychic abilities for evil emerges in his opening line, greeting a happy couple fresh from their wedding vows with, “Hey, congratulations. Sorry it doesn’t work out.” The effect of even benevolent US involvement is seen when Clooney and McGregor speed up to a fleeing kidnap victim shouting, “It’s ok, we’re Americans – we’re here to help you!” and promptly run him over.

This is a movie which gets its tone just right. Every character is equally wrapped up in his (they are all men) own self-centred fantasies but the viewer is never in doubt of their farcical distance from reality. And yet the film firmly takes sides as, Don Quixote like, sympathy is held for Clooney’s faith in the positive power of the Jedi force to combat the apparently implacable “dark side” – the torturers and aggressors that are the clear embodiments of the neocon attitude.

That the film finishes with a resounding (if fairly silly) plea for hope is perhaps a sign of popular sentiment in the first year of the reign of Barack Obama. That such hope is so clearly marked as fantasy might also suggest something about the likelihood of the US army ever becoming a force for good in the world. But then, if we’re all going down, we might as well laugh about it. 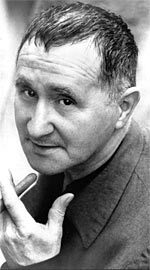