Mental health rhetoric is a distraction

Mental health was the focus of Theresa May’s first major speech on health, given in January. She was strong on rhetoric, expressing her drive to tackle the “burning injustice” of inadequate mental health treatment, while dismissing the call for extra funding.

At best the limited measures announced will do no more than sticking a plaster over a gaping wound. At worst they serve to distract from a far more fundamental and serious government policy approach to mental health, which is moving towards the ending of out of work benefits.

The response from mental health charity Mind celebrates the fact that mental health has risen so far up the political and public agenda. Mental health is in the spotlight as a result of rising need and a crisis in treatment provision. The suicide rate has increased; numbers of detentions under the Mental Health Act have risen; and anxiety and self-harming among young people have gone up.

This has caused a crisis in mental health provision. Some 15,000 overnight beds vanished between 2010 and 2016 as £600 million was slashed from the budgets of Mental Health Trusts. Over the same period numbers seeking treatment rose from 500,000 to 1.7 million.

The result has been people in mental distress left with no support. Three quarters of people with mental health support needs receive no treatment. A chronic beds shortage has meant people being sent hundreds of miles away from home for in-patient treatment.

The measures announced by May will not even scratch the surface of the problem. In an interview with Sky news she claimed that tackling the “stigma that attaches to mental health” is bigger than money issues. Her speech posed the importance of “shared society” for addressing social injustice.

In other words, shifting responsibility away from state-funded interventions and onto civil society — in this case teachers, employers and the community sector.

Under the plans, all secondary schools will be offered mental health first aid training, there will be a review into the support employers can offer employees who have had to take time off work and £15 million has been allocated for community services such as crisis cafes. This works out at just £23,000 per constituency.

None of the proposed measures are in themselves bad, but they won’t directly improve capacity of specialist services where there is the most need. These are where complex issues that can lead to outcomes such as detentions and suicide can be treated.

May’s proposal for investment in digital services is a continuation of policy that seeks instead to limit resources and time spent on therapeutic interventions.

The benefits of those interventions for more complex issues, where a significant factor is the importance of the therapeutic relationship, are being seriously undermined.

May’s proposals also fail to address the root causes of rising levels of mental distress. The growth in anxiety among children and young people can be directly linked to education policies that involve constant testing and impose judgments on abilities from a young age, as well as “parental strife” resulting from financial and employment stresses.

Researchers in Oxford and Liverpool proved a correlation between increased testing for out of work benefits with rising need for mental health support. The study looking at data from 2010 to 2013 associated the Work Capability Assessment with an extra 590 suicides, 27,900 additional cases of self-reported mental health issues and the additional prescribing of 72,500 mental health drugs across England.

With the UK government due this year to report to the United Nations on its treatment of disabled people following last year’s finding of “grave and systematic violations due to welfare reform”, it is looking for examples to present as progressive. Its approach nevertheless continues to be dominated by an emphasis on employment as a “well-being” outcome. The mantra “Work is good for you” has been universally adopted across the DWP, local authorities, mental health charities, and the new Mayor of London’s “roadmap” for mental health.

The green paper “Improving Lives” currently out for consultation expresses the government’s concern that 67 percent of those in receipt of Employment and Support Allowance (ESA) have been found not fit for work and, as a result, have no access to “integrated and personalised employment and health support”. The paper proposes extending work related activity to those in the support group including work focused interviews with job coaches. It has not been ruled out that this will be mandatory.

The green paper has been widely welcomed by all political parties and charities as a “great opportunity” to improve disability employment support. In reality it heralds the next phase in the Tories’ dismantling of social security and a lot more mental distress to come.

Sound of the Underground 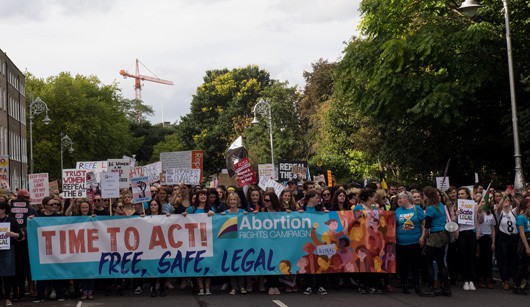 A real fight to repeal the 8th amendment