This article is over 4 years, 3 months old
What began as a discussion of sexual harassment has broadened out to other aspects of the fight for women’s liberation. But working class women must be at the centre of debate, writes Sally Campbell.
By Sally Campbell
Downloading PDF. Please wait...
Monday 26 February 2018

The #MeToo movement, which took off in reaction to the Harvey Weinstein sexual assault revelations, has continued to reshape discussions around women’s equality.

The British Film Institute announced last month that it has drawn up a set of eight principles in consultation with unions including Equity and Unite, industry bodies such as Women in Film and TV, Writers’ Guild of Great Britain and UK Screen Alliance, and employees and freelancers working across all aspects of the industry. No film will be able to access funding from the BFI unless its makers sign up to the principles, which aim to tackle bullying and harassment.

At the Bafta awards for film and television last month some stars, inspired by similar acts at the Golden Globes in January, brought activists along to highlight campaigns. Gemma Arterton, who also led the call to wear black in solidarity with the Time’s Up movement, was photographed with Gwen Davis and Eileen Pullen, two of the women who worked at Ford Dagenham in 1968, leading the fight for equal pay. The story of their strike was beautifully told in the 2010 film Made in Dagenham.

Interviewed on the red carpet, Davis said, “We were always treated like nobody and why should we be?”

Her words recall those of women working at Ford Chicago over the past few decades, in a chilling article published in the New York Times last December. Titled “How Tough Is It to Change a Culture of Harassment? Ask Women at Ford”, the piece interviews a number of women who recount horrendous experiences at the assembly and stamping plants.

They describe sexual harassment by workmates on the shop floor, by supervisors who demand sex for favourable shifts. They also despair at the lack of help they have received if they speak out. Trade union reps have downplayed the harassment and advised them not to “cause trouble” by reporting it; management have made statements about a company ethos but done little on the ground to change the atmosphere.

The jobs at Ford pays well — women could earn three times what they might in retail or cleaning. So leaving the job was not a decision any would take lightly — even if staying meant putting up with harassment.

But some refused to put up with it. After a spate of complaints from women in the 1990s led to a $22 million pay-out in the courts, Ford’s management agreed to set up awareness training at the plants. These did seem to have an effect. Sexual harassment awareness was made part of workers’ general training when they started at the company.

Things improved — until the economic crisis hit in 2008 and 700 jobs went at the assembly plant. In the climate of uncertainty, some men blamed women for “taking their jobs”. Then, when things improved after 2010 and more workers were taken on in a hurry, the company’s awareness training went out of the window.

It has taken another spate of lawsuits — and a $10 million pay-out in August 2017 — to force Ford to take the issue of harassment seriously again.

Following the publication of the article the company has sacked a number of supervisors accused of serial harassment, as well as a top executive, president for North America Raj Nair, for behaviour “inconsistent with the company’s code of conduct”.

In 2015 half the complaints of harassment received by Ford’s entire US operation came from the two Chicago plants; now it’s down to a quarter. In response to the #MeToo movement, one of the women featured in the article suggested a new hashtag: #WhatAboutUs.

The Ford case demonstrates a simple truth. Changing a culture of harassment in the workplace takes more than individuals changing their behaviour. It takes more than women being prepared to speak up. It requires structural change — or gains can be reversed.

I was recently asked by two women students on a film production course how they could assert themselves in a male-dominated classroom — and industry. In those narrow terms the answer might seem to be to “lean in”, as Sheryl Sandberg has suggested; to dismantle the “internal obstacles” that stop you “acquiring power”. Sandberg promotes the idea that women can make “adjustments” to themselves in order to reach the top, as she has (Sandberg is the chief operating officer of Facebook).

But, as Carrie Gracie argued at the BBC, the question of respect, for most workers, is not an individual one. That’s why collective organisation has to be central to strategies to transform workplace cultures. Trade unions must put themselves at the centre of that — even when it means taking on difficult cases which pit one member against another.

Where do women get the confidence to challenge harassment? One major source is the knowledge that you will be backed up and supported when you take a stand. For the women at Ford Dagenham in 1968 that solidarity was hard won — we shouldn’t have to be having the same arguments again today.

#MeToo has created a moment in which greater change is possible. Socialists must put themselves at the front of campaigns to drive back harassment wherever it appears. 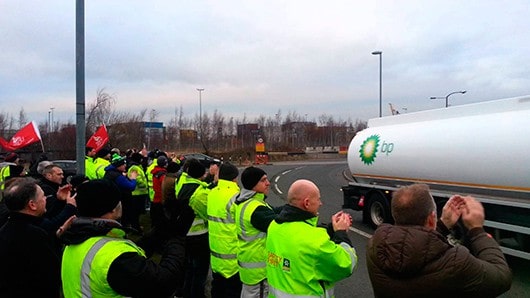 Playing a part against injustice

Founded on the class struggle

However we dress, wherever we go...