Migrations is an exhibition that demonstrates the profound effect migration has had in shaping the course of British art history, showing the changing styles, trends and mediums. Paintings, video and sculpture are placed side by side to give a broad vision of this history. One of the first images in the exhibition is An English Family at Tea (Joseph van Aken, circa 1720). The faces of the subjects stare vacantly – sitters in an age when art was commissioned by the rich, to be enjoyed by them alone.

Contrast this with The Mud Bath (David Bomberg, 1914) in the Jewish Artists and Jewish Art room, a large and striking piece in which the figures of Jewish patrons in an East End bath house are reduced to bold lines. Stark reds, whites and blues evoke the colours of the British flag.

As you move through the exhibition you are confronted by art that not only is the result of the fashion of the time, but reflects the political climate and changing communities. British cities and communities are continually shaped by the introduction of new cultures.

From these pieces you then move through to art which comments on the condition of migrants oppressed within British society. The impressive series Go West Young Man (Keith Piper, 1987) explores the issues of second generation migrant communities and the search for identity in a new country.

The final room explores the reality that we are all faced with an increasingly migratory existence with a number of films. The most memorable of these is Handsworth Songs by the Black Audio Film Collective (1986). The film follows on from the inner city riots in London and Birmingham in 1985. Here we see news clips condemning the rioters interspersed with interviews with the working class people affected by the riots, and Malcolm X visiting London.

The film is shown alongside the hypnotic Railings (2004) by Belgian artist Francis Alÿs. Through the repetitive rhythm created by hitting a stick on railings, his work highlights the modern condition of people constantly on the move through urban environments which have become increasingly repetitive and indistinguishable from one another. This exhibition is well worth a visit. 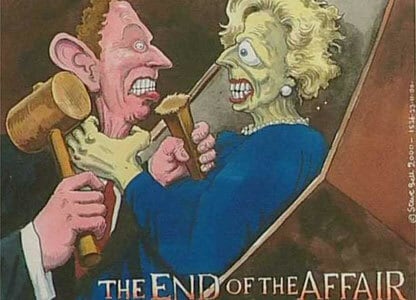