This article is over 8 years, 8 months old
The period since the mass strike on 30 November 2011 has been one of huge frustration for many trade union activists. While the Tory assault develops we have seen almost eighteen months of intermittent strike action, though of course nothing on the scale necessary to stop the attacks.
By Michael Bradley
Downloading PDF. Please wait...
Wednesday 01 May 2013

In the public sector we now see ongoing action by the PCS and possible national action on pay by both of the big teaching unions (NUT and NASUWT). At NUT conference a motion calling for a national strike on 26 June (alongside possible action by the PCS) received support from 30-40 percent of delegates. As it is the two unions will start joint regional action on 27 June in the North West of England.

There are other straws in the wind. Some 3,000 health workers in mid Yorkshire could start a ballot for action in early May. Brewery workers in Burton look set to strike against pay cuts. There has been national action by post office counters workers and workers at the BBC. Postal workers are starting a consultative ballot over privatisation, pay and conditions, and Unite members at Ford’s Dagenham plant are balloting now.

But overall the level of struggle is lamentably low. A big gap exists between workers anger and their confidence to fight independent of a lead from the top. But when given a lead, workers have repeatedly shown that they will go into battle. But where is the lead that could see a breakthrough by the unions?

The PCS under Mark Serwotka are fighting. But the PCS are at the moment the notable exception. There were votes at the TUC and CWU conferences for a general strike, Len McCluskey’s support for the general strike and his attacks on Blairites in the shadow cabinet were enough to bring down the wrath of Ed Miliband. But there is little sign of these words turning into action.

The near 80,000 votes (36 percent of the total) that Jerry Hicks received when he stood against Len McCluskey in the election for Unite’s general secretary are significant. They point to the existence of a sizeable layer of workers who want something better that what’s on offer from even the most left wing union leaders (see the interview with Jerry Hicks in this issue of Socialist Review).

Socialists have to be at the centre of pulling together those in the movement who see the need to fight now and don’t simply put their faith in the officials. The Unite the Resistance initiative has brought together some of that minority alongside many of the best of the trade union leaders at two 1,000-strong national conferences and a series of successful regional events.

The People’s Assembly which meets on 22 June looks set to be big and has very broad support from the unions. Every activist and campaigner should get there. The event could provide a really useful forum for a debate about how to take the struggle forward. But the measure of the events success will be whether it leads to more activity and more industrial action. Socialists should go to the event arguing that the fightback has to start now.

We need mass protests like those organised by the TUC in recent years. But as last October’s TUC demo showed protests alone will not stop Cameron. We need industrial action by the trade unions on a scale capable of derailing the coalition.

Despite Ed Miliband’s attack on Len McCluskey some, even on the left, see electing a Labour government as the only real defence against austerity. But as we can see with the present wave of protest against the bedroom tax our side can’t just wait for Labour. The bedroom tax protests, along with the response to the death of Thatcher, show the deep anger that exists in working class communities.

When over 6,000 march in Glasgow and 1,000 march in Leeds there is more than just a whiff of the Poll Tax over the attacks on benefits. Waiting on Labour when it’s prepared to make the Tories’ cuts is not an option. That’s why we’ve got to build networks of all those who are prepared to build solidarity and fight for co-ordinated resistance in the here and now.

Such networks as they develop could put real pressure on the union leaders to fight. We need to do everything we can to galvanise rank and file activity. Every fight has the potential to develop workers confidence and we have to use any official call to develop the capacity of workers to act independently.

Being solidarity for the PCS and striking teachers, getting behind the battle at Fords or the fights in the post is all part of the process of rebuilding rank and file confidence. 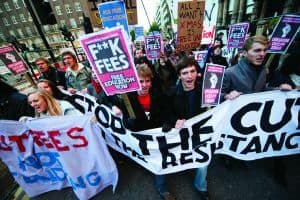 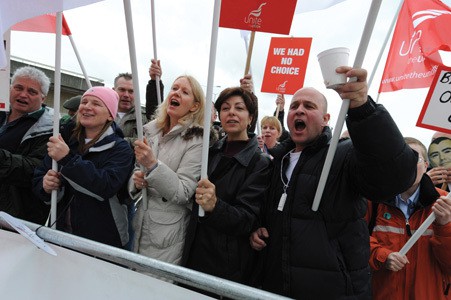 People's Assembly: the next steps