Of Mouse and Men

It is 1964, and Easy Rawlins is working as a janitor at Sojourner Truth school in Los Angeles. When someone sets fire to his school, Mosley’s enduring character begins to move back into the semi-criminal circles of his youth to find the culprit.

In these six separate but linked stories, Easy is living with his two adopted children and a woman whose love he is unsure of. He is tortured by guilt for his part in the death of his friend Mouse. It is this emotional turmoil which sends him away from his new life to help various friends out of sticky situations.

In these stories, Mosley presents us with an array of fascinating characters including a white southerner who has made money in California, a veteran of the First World War, a German cobbler, and many hard working women who fiercely protect husbands, lovers and children. Easy questions a cross-section of working class and wealthy LA trying to help friends avoid trouble.

Mosley is acutely perceptive about working class and poor lives, white and black, in the period when the civil rights movement and the Vietnam War are looming. He describes the small acts of everyday oppression faced by black workers in LA while reminding us of the stillborn lives they have escaped in the south.

Easy’s anger at a thousand petty acts of racism is palpable – he is disgusted at himself for saying ‘yes, sir’ to a foreman, and his reaction provides a foretaste of political events yet to come. Equally he rails against the limitations that being working class or poor impose on talented young men and women of whatever colour. He sees the pain of hard work and debt in the hands of a poor white woman from the south, and hears a petrol station attendant complain about a wealthy family buying up local land and changing the street names.

All Mosley’s people are briefly but memorably drawn. His is a sympathetic and non-judgemental picture of a hidden United States in which people are struggling to live well, north and south. Six Easy Pieces is less overtly political than Easy’s last outing, Bad Boy Brawly Brown, but is quietly political nonetheless. Easy finds friendship without prejudice enormously valuable: ‘My weakness had always been the offer of equality.’ He questions his ability to make his lover happy when he is just a janitor trying to live a good life, not a leader of struggle. He torments himself over his lost friend, tantalised by the possibility that Mouse may still be alive, and driven to find him.

Mosley has created a character who is maturing and developing as the racial and class polarisation in the US grows and social crisis beckons. It is impossible to ignore the contemporary resonance of the chasm between rich and poor, the systematic racism and oppression of women, and the growing rage at a brutal, exploitative and dangerous system.

The mosaic of lives and experiences represented in Six Easy Pieces tells us much about the early 1960s, and not a little about 2003. 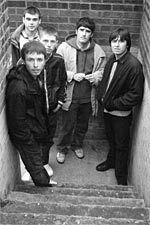