This article is over 5 years, 0 months old
By Sally Campbell
Downloading PDF. Please wait...
Monday 29 May 2017

This lovingly made stop-motion animation tackles difficult realities in a straightforward way that can speak to adults and children alike. The brightly coloured models with huge heads and even huger eyes convey a remarkable range of emotion.

Dealing with trauma is not new in animations aimed at a family audience, but rarely is it done entirely without irony or metaphor or cute animals.

My Life as a Courgette tells the story of Icare, known as Courgette, who, while trying to avoid a beating, accidentally causes his alcoholic mother to fall to her death. He is taken to a children’s home where he must learn to live with six other kids, all of whom have their own tragedies to deal with.

One boy tells Courgette the others’ reasons for being there, revealing histories of sexual abuse, domestic violence, racist policing, poverty, substance dependency and deportation.

All the children show the effects of stress and insecurity, but they also have many moments of laughter and exuberance.

The film is scripted by Celine Sciamma, who wrote and directed the brilliant Girlhood (2014) about black girls in the suburbs of Paris. That film was reminiscent of Ken Loach in its simple, real and moving portrayal of people often ignored. She employs a similar approach here.

The filmmaker, Claude Barras, also cites Loach as an influence. This is clear in the positive portrayal of the social workers who run the home — this is no grim, cold institution, but a place where workers try to create a genuinely warm and loving environment.

The children are taken on a trip to a ski resort where the staff put on a disco for them (to an excellent Swiss new wave soundtrack). And while they’re out playing in the snow we see how they interact with other people — and how others react to them. Another child at the resort offers her hat to one of the kids — who is then promptly accused of stealing it by the girl’s mum.

And in an incredibly moving scene the kids all stand and watch, wide eyed and longing, as a mum picks up her son and brushes him down after he falls over.

The kids aren’t the lone, “special” orphans of much children’s literature and film. They share the need for care and stability. Barras has said he wanted to create a “collective feeling of loneliness”. When one of the children is threatened with being forced to live with her cruel aunt, they all go on hunger strike in protest.

But ultimately, when a happy ending is offered to some of the kids, the others encourage them to take it — even though the rest will be left behind.

My Life as a Courgette is truthful and clear-eyed in its handling of grim topics. It delicately expresses children’s — and adults’ — need for love and care and solidarity without ever toppling over into sentimentality. 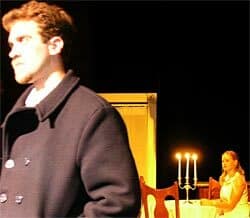 Don't forget to pack your...