I’m a socialist …get me out of here!’ was the ‘Guardian’ TV critic’s verdict on 13 May, writing about Clare Short’s resignation performance in the House of Commons. In the self consuming world of print and electronic media this was the umpteenth pun on the title of LWT’s latest variant of the ‘reality TV’ strain. It became a toss up as to which was more infuriating; the ‘I’m A Celebrity …’ show itself, or the lazy journalism which sought to bathe, pathetically, in its referential glory.

‘Shooting People’ is a short but worthy attempt to explain how popular viewing has become dominated by the likes of ‘Survivor’, ‘Temptation Island’, and ‘I’m A Celebrity …’ Some of the authorial disdain is admirable. How about this on the biggest transgressor of all, Channel 4’s ‘Big Brother’: ‘This dandruff of selfhood, elevated to the status of a worthy subject, rushes in to fill the space vacated by overarching narratives that once extended the range of their followers’ vision, however imperfectly, beyond the little facts of individual existence.’

‘The “self” has always been a brand, part of a constructed reality separate from the body’, declaims Gary Carter, executive at ‘Big Brother’ producers Endemol. Brenton and Cohen retort, ‘The white heat of technology gives off intoxicating fumes, and such rhetorical flights of fancy show a certain delirium.’

Nevertheless, the genre bears closer examination and the authors are careful to avoid a ‘golden past’ approach to popular culture when tracing its antecedents. For example, they remind us that the patron saint of documentary realism, John Grierson, used filmic and editing techniques devised for fictional purposes to reconstruct a mail-train sorting carriage in a studio for the infamous ‘Night Mail’ of 1936.

Other traditions of ‘cinema verité’ in Europe and the ‘direct cinema’ of Frederic Wiseman and DA Pennebaker in the US benefited from lighter, cheaper and more mobile technology. On British TV the largest steps in this direction were made not by ITV shows like ‘World In Action’, but by the BBC as early as 1974 with Paul Watson’s ‘The Family’, a tetchy, ‘fly on the wall’ snoop inside a Reading home.

In 1999 the BBC ran as many as twelve ‘docusoaps’ with humour as the value-added ingredient. We could guffaw at the antics of a batty learner-driver, a camp airport official or flummoxed hotel workers. In the US Fox TV’s ‘Cops’ set the mould for a feast of ’emergency service docs’. MTV, narcissistically, stuck a slice of its own target audience in a shared apartment to watch how the egos landed, and called it ‘The Real World’.

Chuck into this mix the ubiquity of surveillance technology, a cultural and political hegemony of ‘me, myself and I’ aspiration amplified by a dubious fashion for social psychology, and an economy gasping to produce the surplus profits needed to infuse a radically deregulated broadcasting environment with advertising spend, and we start to understand the fascination ‘game-docs’ undoubtedly hold for British audiences.

The trump card which lifted most of the commercial-channel products above the meagre ratings of, for example, BBC’s ‘Castaway’ is the democratic and multi-mediated pull of interactive voting. More viewers voted for ‘Big Brother’ evictions than watched the BBC ten o’clock news just before the 2001 general election.

Unfortunately, the brevity and density of prose restricts the readership potential for this work. On the one hand some holes in the history remain unfilled – like accounting for the spectacular cruelty inherent in much pop culture from boxing and wrestling, to slapstick and ‘Jackass TV’. On the other a lack of illustrations and the rarified vocabulary puts it beyond a school or college media studies market.

That said, it concludes with some very prescient comments on ‘militainment’ US shows like ‘Profiles From The Front Line’, which are ‘no more than high production value bunting, a flattering backdrop for the new imperialism’.

And it did leave me creased up with laughter on one point. It describes how Charlie Parsons, Labour Lord Waheed Alli and Sir Bob Geldof are growing fat on the proceeds of their Planet 24 company and its Castaway Television Productions subsidiary. ‘Survivor’ was their brainchild, developed from a skit on ‘Breakfast TV’. They are now suing LWT and the producer of ‘I’m A Celebrity”s Natalka Znak, claiming intellectual property rights. Exactly what intellectual property does ‘Celebrity’ or ‘Survivor’ contain that anyone would want to claim? 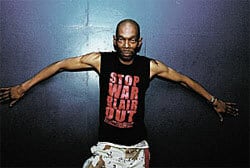