N is for national liberation

This article is over 13 years, 10 months old
"Imagine there's no countries," sang John Lennon. "Nothing to fight or die for." It's a sentiment that any socialist would identify with.
By Dave Crouch
Downloading PDF. Please wait...
Tuesday 01 July 2008

How it sticks in the throat to hear Gordon Brown drone on about planting the union jack while he deports asylum seekers and sends more troops to occupy foreign lands.

So if we’re so down on nationalism, why do we make it a point of principle to stand side by side with national liberation movements?

On one level the answer seems obvious. We wouldn’t dream of saying “England for the English”, but “Iraq for the Iraqis” is an excellent slogan in the anti-war movement.

Even then, many on the left feel uncomfortable about supporting Iraqi forces fighting the occupation, or standing with Iran against the US.

National liberation has exercised some of the movement’s finest minds. Marx wrote in the Communist Manifesto that working people “have no country” – a Lennonist sentiment if ever there was one.

But he was also a passionate supporter of national liberation struggles, such as that of the Irish against British rule. Marx’s idea was that British workers needed to be won to supporting Irish freedom to rid themselves of the nationalist prejudices binding them to their own ruling class. He wrote, “A people which enslaves another people forges its own chains.”

This insight is acutely necessary today – to convince workers that we have a common interest as a class to overthrow capitalism, socialists must persuade them to see workers of other nations as allies and equals. When “our” nation is oppressing another, we stand with that nation against our own.

Russia’s revolutionary leader Lenin began a sharp exchange over this with Polish Marxist, Rosa Luxemburg which continued after the revolution in Russia in 1917.

National liberation was seen by Luxemburg as both a utopian demand – an impossibility in a world of powerful imperialist states – and dangerous, because it would only encourage nationalism. In response Lenin made some key observations.

First, he wrote, we shouldn’t confuse political self-determination with economic independence. Certainly, in today’s world small nations will always rely on close economic ties with large ones. But that doesn’t rule out the possibility that colonies can win their political independence from an empire. Over and over again Lenin has been proved right on this score, as first the British Empire crumbled after the Second World War and more recently the USSR collapsed in the face of mass movements for independence in many of its constituent nations.

Second, there can be considerable political differences between the nationalism of a small oppressed nation and that of a large imperialist state. It’s like the contrast between the last night of the Proms and singing “A nation once again” in a Dublin boozer.

For socialists in a big imperialist state it is criminal to ignore this difference. A nation that has a history of denying national rights to other nations has no right to lecture those nations about nationalism. Therefore British socialists, in a country synonymous to many around the world with the empire and the Iraq war, have a duty to support the right of nations who have suffered at our hands to direct their own affairs unmolested.

Moreover, we should campaign for historical injustices to be righted – from apologising for slavery to returning all the loot of empire. The more national grievances are assuaged, the greater the potential for class divisions to come to the fore.

Third, Lenin saw that national liberation movements can have explosive political potential. Mass opposition to imperialism can provoke political crises at the centre, opening up real possibilities for the left. The “revolution of flowers” that brought down fascism in Portugal in 1974 broke out after a revolt in the army in Portuguese colonies. The collapse of the Soviet occupation of Afghanistan in 1989 was a harbinger of upheaval across the Russian empire. Resistance to US troops in Vietnam was a major factor in crises that rocked the US in the 1960s and 70s.

Does that mean that socialists should rush off and establish national liberation movements all over the shop?

Most importantly, Lenin’s approach starts from the need for workers’ unity across national boundaries. So it is daft to call for national rights and self-determination where nobody is doing so already.

Our overriding goal is international workers’ unity – but unity on the basis of democracy and equality, not the violently enforced unity of empire. When equal rights are impossible without breaking away from the oppressor nation, then socialists back movements demanding independence. But it’s vital to see the distinction between backing the right to independence, and pushing for that right to be exercised.

Also we can have nothing to do with reactionary national movements that enforce imperialism, rather than undermining it. “English independence”, for example, is just such a backward pipedream, like talk of “rights for whites”. British workers are oppressed on the basis of their class, not on the basis of their national identity.

Lenin’s approach – and the lessons of its application in Russia during the first few years after 1917 – provides socialists with important insights with which to inform our attitudes to widely varying national liberation struggles today.

We want to see British and US imperialism defeated in Iraq. That means we stand with the Iraqis trying to achieve that aim, regardless of their politics and without preconditions. But at the same time we want to foster international workers’ unity, so we reject outright the Salafist murders of Shia civilians.

Unconditional but critical support of national liberation movements is as important to anti-imperialists today as it was when European Marxists were grappling with the issue a century ago.

J is for Justice 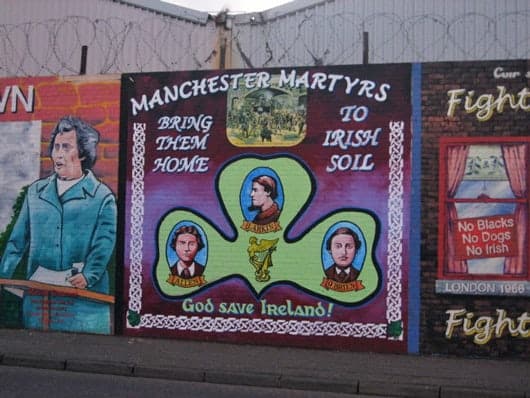