Gerry Conlon’s great friend Paddy Hill of the Birmingham Six, at the recent book launch at the Camden Irish Centre, described it “as a warts and all” picture. That is the great strength of Richard O’Rawe’s book, who having grown up with Conlon is best placed to understand his life.

Conlon, one of the Guildford Four released in 1989 from the Old Bailey, served 15 years for IRA bombings that killed five people and injured 65 — a crime of which they were completely innocent. Confessions had been beaten out of them, which worse still, implicated the Maguire family including Conlon’s own father Giuseppe: all innocent, all convicted. The prosecution failed to disclose evidence that supported Conlon’s alibi and unbelievably the establishment held onto the prosecutions despite an IRA cell making admissions to the bombings.

On his release Conlon immediately set about fighting for the release of the Birmingham Six, who were released in 1991. Those two iconic images of both furious and exhilarated Irish inmates coming out of the same court into the light to public acclaim, serve as inspiration for all those fighting to overturn miscarriages of justice.

This book shows how those images of celebration provide an incomplete picture. Those released having gone through such trauma, that left to fend for themselves without any psychological support, inevitably serious problems develop — especially so for Conlon who wrongly felt responsible for his father who died in prison.

O’Rawe’s harrowing account shows Conlon wasted much of his life and all his compensation on a crack cocaine addiction. In 1992 the research of Dr Adrian Grounds compared the mental state of miscarriage of justice victims to that of “brain-damaged accident victims, or people who have suffered war crimes”. Undoubtedly Conlon’s decline was fuelled by the investigations that failed to hold a single person to account for the Guildford Four or Birmingham Six travesties.

Gerry Conlon, however, simply refused to be defined by his trauma. He was the most powerful voice for those in need. The book recalls his meeting at the Marxism Festival in 2010 where he spoke alongside Moazzam Begg, and called for the release of other innocent prisoners, Gary Crichley and Sam Hallam (both of whom were released in 2012), and Shaker Aamer.

In 2013 he travelled from Belfast to speak at the first rally outside parliament for legal aid, in a fight to stop private companies like Eddie Stobart taking over the provision. He spoke beautifully, combining passion with humour, summing up the problem in an elegant phrase: “Back in the 1970s they were sending innocent people to prison by the vanload, if the likes of Eddie Stobart gets in they will be sending them to jail by the lorry load”. This is a book you need on your Christmas list. 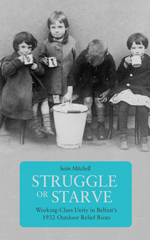