There are several reasons why socialist film fans will be pleased to hear about the release of Neds. It is the return, after an eight-year absence, to directing by Peter Mullan, the one-time Scottish Socialist Party supporter.

His directorial debut, Orphans, was a breathtakingly funny tour through 24 hours in a declining Glasgow. Readers may know his face as the lead in Ken Loach’s My Name is Joe, his acting talent in evidence in the supporting role he takes here as the alcoholic father of sensitive lad John McGill.

It is 1972, and John is starting senior school. I remember during my own primary years the fearful expectation with which I would wonder about what we called “the big school” – the enforced entry into which is a key moment in any child’s life. For John, education comes less from the dull daily classes of maths and Latin than the lessons school gives in the arbitrary violence and narrowing of horizons of working class pupils pushed into the lower sets. As such, Neds is a touching and archly satirical film about unfairness – the most keenly felt of childhood experiences – which it conveys with warmth and great wit.

The school that is used in the film is Wyndford School, which in real life was subject to an extraordinary occupation (back in the dark days of last year when that still seemed unusual) in protest against closures. A mention of Tolpuddle, and a register which includes a lad named Engels maintain the left wing reference points, while the general atmosphere of schoolyard brutality will no doubt pleasurably bring to mind the film Kes.

When the haughty mother of John’s well to do best friend abruptly brings their budding friendship to an end, John decides he might as well start conforming to society’s prejudice and become a Ned – a non-educated delinquent.

Unfortunately, his dramatic change in character signals a change for the worse in the film itself. While the costumes and music of the developing 1970s remain fun, and the scenes of gang violence provide a real adrenalin rush, the characters are not developed enough to sustain the desperate turn of events.

For this reason, and due to some slow but not entirely coherent plotting, John’s fall into drug addiction and homelessness sadly lacks the engaging critique of the comedy of the opening scenes. As the social issues in the film begin to stack up, John becomes a figure isolated from wider society and so the critique falls away.

It would be a good thing for Neds to receive a wide audience, but given the problems it has in integrating dramatic depth with social awareness, Mullan might in future be better off sticking to comedy. 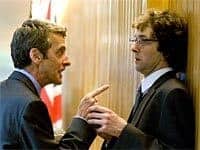