The EU is profoundly important to our lives, but its very complexity tends to be off-putting to anyone attempting to grasp its nature. So this serious study of the EU, written by a foremost Marxist intellectual, is to be welcomed.

Ireland’s second referendum on the Lisbon Treaty – completed last year after Perry Anderson finished his book – is a useful point of departure. The treaty was agreed at a meeting of EU leaders in June 2007 after the collapse of the EU constitution.

The constitution addressed the EU’s eastern expansion – a process pushed by Washington as much as it was by Brussels. It proposed increasing the power of Germany, France, Italy and the UK, while inscribing free market capitalism. This constitution was thankfully killed off by referendums in the Netherlands and France.

The Lisbon Treaty is, in effect, the constitution warmed over – with reference to unfettered competition “tucked away in a protocol, rather than appearing in the main document”. It was also framed so as to need no democratic stamp of approval – except in Ireland where a referendum was required.

The Irish initially rejected it, throwing the EU elite into crisis. They were consequently sent away, not to return to Brussels until they had the right answer. The world crisis and Ireland’s particularly bad showing within it were a godsend for this grossly undemocratic manoeuvre.

The Irish were told by mainstream politicians and press that their economic woes could only be overcome if they voted yes. The fact that, beyond fostering the kind of free markets that created the crisis, Lisbon had little relevance to this issue was of no interest to the yes campaign. Lisbon was dutifully ratified second time round.

As Anderson points out, “Virtually every time – there have not been many – that voters have been allowed to express an opinion about the direction the Union was taking, they have rejected it.” And on each occasion “the political class promptly sent them back to the polls to correct their mistake, or waited for an occasion to reverse the verdict”.

The book’s three central chapters – on Germany, France and Italy – provide brilliantly observed and rich historical schemas of their evolutions to the present conjuncture. One could scarcely wish for a better picture, for instance, of the corrupt cesspit of Italian political life.

The EU’s contempt for democracy has been highlighted in its relations with Cyprus and Turkey. Anderson shows how Greek pressure helped to get Cyprus into the EU before Turkey’s ongoing attempt to join came to fruition. Following this, the US and Britain tried to force through the UN a division of Cyprus which was designed to overcome this potential barrier to Turkish membership – without resolving the tensions between Turkish and Greek Cypriots that Britain had fostered when it played divide and rule on the island after the Second World War. The book is worth reading for these chapters alone.

Nonetheless, Anderson’s arguments cannot be accepted without reservation. While his top-down descriptive approach to political history brilliantly illuminates the undemocratic cynicism of Europe’s elites, his attempt to synthesise history and sociology is less successful. This leaves a strategic vacuum. But it remains true that Anderson provides invaluable insights from which such a work of strategy might be forged. 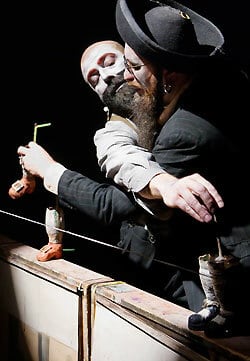 Theatre that battles against the Edinburgh Fringe money makers