This article is over 11 years, 6 months old
LGBT history month was launched after the scrapping of the Tories' Section 28 legislation. But, six years on, Tory cuts will hit LGBT people hard.
By Laura Miles
Downloading PDF. Please wait...
Tuesday 01 February 2011

Lesbian, Gay, Bisexual and Transgender (LGBT) History Month was launched in 2005 in Britain to coincide with the abolition of the Tories’ infamous Section 28 legislation.

No one was ever prosecuted under this very nasty piece of opportunistic homophobic legislation. However, the fact that Section 28 of the Tories’ Local Government Act of 1988 made it illegal for local authorities to “promote” homosexuality (ie to treat it as acceptable) was sufficient to intimidate local authorities and force teachers to shy away from openly discussing LGBT issues with students or each other.

The impact of Section 28 arguably continues to resonate in the education system. It is no doubt a factor in survey results by Schools Out and other organisations which find that a large proportion of teachers still do not feel confident to challenge homophobic bullying in schools.

Now every February LGBT people organise events to celebrate who we are. Of course, while there are plenty of organisations and LGBT-friendly companies happy to attract the pink pound during LGBT History Month, socialists are keen to support it because it is an opportunity to show our commitment to fighting LGBT oppression and to raise the demand for LGBT liberation.

One reason to celebrate this year is the legal victory last month of the gay couple Martyn Hall and Steven Preddy who had been refused a double bed by hotel owners who cited their Christian beliefs as the reason for refusal.

Yet overall the picture is mixed. On the one hand homophobic incidents are still common in society and in the press. In the middle of last year, for example, some of the tabloid press ran disgraceful stories about gay asylum seekers which thankfully provoked many complaints and a lively picket of their offices by students and socialist trade unionists.

Another reason to celebrate might be the extensions to legal protection for gay and lesbian, and particularly transgender, people embodied in the Equality Act of October 2010. Yet this legislation is widely suspected of having few teeth to enforce its provisions.

Despite rising numbers of reported homophobic and transphobic attacks, including murders like that of Ian Baynham in Trafalgar Square in 2009, surveys show that there is increasing acceptance of LGBT people in society, especially among young people, compared to just a couple of decades ago. Yet Ian was kicked to death by a group of drunken young people.

The Tories are now back in government. But they have distanced themselves from the blatant homophobia of the Thatcher era. This has been an important part of the attempt by the Tories, especially under David Cameron, to detoxify themselves as the “nasty party” and rebuild some support. But the Tory leadership’s acceptance of “social liberalism” goes alongside avid support for the hard economic neoliberalism of the Thatcher era.

So open homophobic discrimination will be replaced by harsh cuts that will severely damage LGBT support organisations and cut off vital lifelines for many people. This will not affect all LGBT people equally but will disproportionately hit working class LGBT people, who are more likely to depend on these services.

Many organisations are slashing staff and services for LGBT people. For example, in light of NHS rationalisations, when primary care trusts are reportedly making decisions not to carry out knee and hip replacement operations or cataract removals, how much harder is it going to be to argue for gender reaffirmation surgery for transsexual people?

Last October an alliance of London LGBT organisations which stand to lose a huge chunk of their £28 million annual funding from London councils launched the LGBT Say No! to Cuts campaign. The funding helps to pay for services such as homelessness advice, youth homelessness prevention, homophobic and transphobic hate crime prevention and victim support, domestic abuse services, anti-homophobic bullying work in schools and support to under-18s at risk of sexual exploitation.

These are key services for many LGBT people because mainstream services often do not understand LGBT people’s needs. Consequently, these needs are ill-served or even unrecognised by those providing affordable housing, physical and mental health support, and social care. Nor is it hard to see that when workplaces are hit by redundancies LGBT people are likely to be more vulnerable as they may be seen as “not having the same family responsibilities” as straight employees. Considerations like that are bound to make a lot of gay people think twice about being open about their sexuality.

In these circumstances life can only get more difficult for those LGBT people who can’t afford to buy into the pink pound lifestyle. Socialists need to carry an argument among LGBT people that there is a class response to the cuts which involves recognising that there is no future in fighting separately as LGBT people but there is hope in joining with all those who want to fight back, LGBT and straight, men and women, black and white. Many LGBT people will have learnt that already through being part of the student protests. 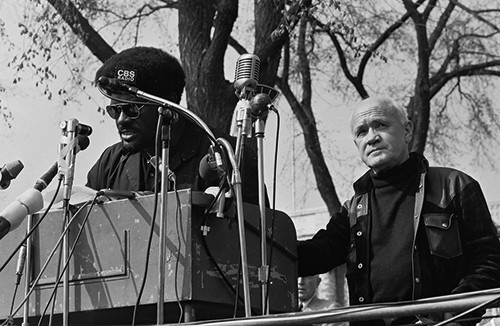 When gays and Panthers were united