This article is over 10 years, 9 months old
The revolutions that have swept the Arab world have received an unexpected echo: on the streets of Israel. In July, the New York Times reported on how, "Six months after Cairo's Tahrir Square became synonymous with the region's transformation, another Middle Eastern city has been hit by Facebook-driven protests with potentially serious political consequences.
By Mark L Thomas
Downloading PDF. Please wait...
Thursday 01 September 2011

But here in Israel, where urban tent cities began springing up a week ago and continue multiplying across the country, the issue is not democracy but the plight of the consumer, especially in housing, food and other basic goods.” The Times added, “while Israel’s Arab neighbours have historically been seen here as the source of the country’s woes, now some are calling them an inspiration.”

Israel has long boasted that it was the only democracy in the Middle East (though the picture is rather different if you’re Palestinian). Now Israelis are learning lessons in democratic protest from Arabs.

The protests spread from Tel Aviv across Israel’s cities. On 9 August as many as 320,000 people took to the streets. So, should the anti-Zionist left support the Israeli “tent protests”?

Israel was established on the principle of “Jewish land, Jewish produce and Jewish labour,” in other words, the dispossession of the Palestinians from their land and their expulsion from the Zionist economy, even as menial labourers.

All this ties Israeli workers to the state, offering them significant privileges, all cemented by US aid of course. As a result, socialists have not looked to the unity of Israeli and Arab workers as the key to change, but the unity of Palestinians with the wider Arab working class across the region, a prospect that has tantalisingly leapt from theory to potential reality with the Arab revolutions, above all in Egypt.
Has anything changed in this analysis? It’s true that there have been occasional chants of “Mubarak, Assad, Netanyahu [Israel’s prime minister]” at Israeli protests, but the dominant mood has been to insist that the protests are “non-political,” and to avoid raising questions about the nature of the Zionist state.

So Israeli flags fly everywhere and each rally ends with the national anthem (“A Jewish soul still yearns/To be a free people in our land/The Land of Zion and Jerusalem”).

Pro-Palestinian Israelis would love to shift the new movement in a progressive direction but Jeff Halper, the Director of the Israeli Committee Against House Demolitions, writing in the radical US magazine Counterpunch in early August, is sceptical. Halper suggests that this protest movement is about protecting Jewish privileges on Arab land, which would be the Zionist movement going back to its Jewish Labour roots. A strong Jewish state, which co-opts the Jewish trade union movement, is seen as the best way to guarantee those privileges. Privatisation and the application of IMF-style neoliberal policies risk polarising Israeli society between rich and poor, driving Israeli living standards for the majority down to Arab levels.

As Halper says, “the protesters do not question the Zionist ideology that Israel should be a Jewish state and are not against the government…they want specific economic reforms, not to challenge the existing political and ideological system.”

Right wing members of the Knesset, the Israeli parliament, have sent a letter to Netanyahu urging him to solve the housing problem by building massively in the West Bank, a call backed vociferously by settler youth who set up tents at the protest site in Tel Aviv with the slogan “Tel Aviv is Jewish.”

“Without a will to finally break out of the Zionist box, the protesters might get half-way, perhaps to a return to some form of a welfare state. But true inclusion, full equality and genuine democracy will evade them,” observes Halper.

Seraj Assis, writing for the Palestine Chronicle, asks about the Arab residents of Jaffa, on the edge of Tel Aviv, who took to the streets to protest against a new “Jews only” housing plan and were dismissed as undermining the state’s Jewish character. Sadly, they have no place at Israel’s tent city protests.

The test will come in September when the Palestinians of the Occupied Territories initiate massive protests around the UN vote. If the tent protests survive until then, will they link up with their Palestinian counterparts? Unfortunately the evidence thus far is not promising. 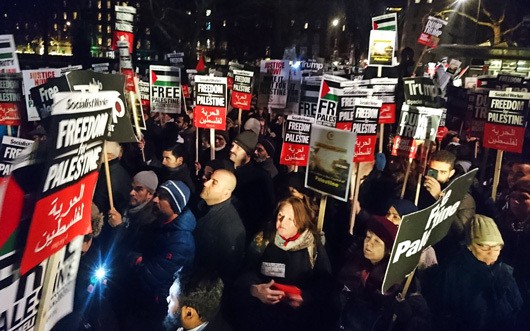 A law unto themselves