This novel is like a long poem. It flutters in and out of realism and surrealism, touching on the subjects of religion, belonging, identity, love and politics.

The text flows easily through the main character Maja’s memories of childhood years in Cuba, her parents’ experiences in Havana as descendants of black slaves and Maja’s life in London, where the main story unfolds.

Maja is a jazz singer who lives with her white Ghanaian boyfriend in a flat with a water leak – the dripping drives Maja crazy as she grapples with pregnancy. Although calm and caring for her parents and younger brother, the brink of suicide and varying degrees of madness come closer to Maja, her best friend or another person who lives in a parallel story in The Opposite House.

It takes a bit of guesswork to figure out who really lives in that house, or the somewherehouse as Oyeyemi calls it, with one door that opens to London and the other to Lagos. But Oyeyemi’s extraordinary skill at making relationships and fictional memories come alive makes this novel well worth reading.

At only 23 years old, this is Oyeyemi’s second book after The Icarus Girl, which she wrote while in sixth form. She has also penned two plays – Juniper’s Whitening and Victimese. Her distinct language conveys maturity, semi-mysticism and psychological vulnerability all at the same time.

She moved to Britain from Nigeria at the age of four and talks with conviction about what it means to love a country that you can hardly remember having lived in, or not to be in love with that country. The same goes for her exploration of Maja’s psyche – the “hysteric” within her throws her between being in love, becoming a mother, being religious, as well as not being and becoming those things.

Nothing in The Opposite House is what it seems but it is somehow precisely what the book tells us: everyday snapshots of an immigrant family living in Peckham and a young woman trying to figure out who she is and what she wants in her life.

The Words on the Streets 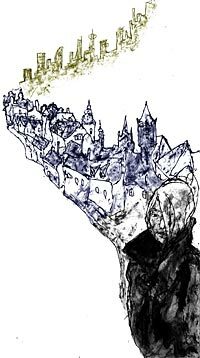