Out of this World

In his 1961 science fiction classic Solaris, the Russian author Stanislaw Lem wrote, “We have no need of other worlds. We need mirrors.” This fascinating exhibition at the British Library shows us how science – or speculative – fiction has imagined other worlds, terrifying creatures and utopian futures while simultaneously exploring political and social questions very relevant to our own society.

The exhibition pieces together the history of the genre through the use of books, artwork, sculptures and manuscripts. While stories that include elements of science fiction have been around since Homer’s Iliad in 850BC, the modern genre dates from the late 19th century.

The enormous technological developments of industrial capitalism spurred the imagination and in many cases cross-pollinated with the utopian impulses of the early socialist movement. This resulted in a number of classics. Edward Bellamy’s Looking Backward and William Morris’s News From Nowhere offered differing ideas of what a socialist future might look like.

In one video on display, the author Gwyneth Jones explains how the genre developed alongside a “literate, skilled working class”, as technical ideas fused with tales of adventure. Perhaps the best example of these works are those of the socialist writer HG Wells, whose “scientific romances”, such as The Island of Doctor Moreau and The Time Machine, reflected both awe and anxiety about the future. His books were also intensely political. The War of the Worlds, his 1898 classic about a Martian invasion of earth, was a searing critique of British imperialism.

A lot of early, pulp science fiction appeared as short stories in magazine anthologies. One such publication was Amazing Stories and the exhibition includes a copy of its first edition from 1926. More cerebral “hard sci-fi” is represented with the 1982 first edition of the British magazine Interzone, which includes such masters of the genre as Michael Moorcock and M John Harrison.

The exhibition also includes examples of science fiction from other media. Classic literary works sit alongside comic books and film posters – a commendable testament to the remarkable lack of snobbery displayed by the curators.

It includes many fascinating items; a first edition of Mary Shelley’s Frankenstein, the notebooks used by George Orwell while writing Nineteen Eighty-Four, even a handwritten score from a Dr Who episode. A tripod from HG Wells’s The War of the Worlds towers over the gallery.

This exhibition will be a delight for science fiction fans. But more than this, it is also an excellent display of the importance of the genre in both interpreting and shaping the modern world. 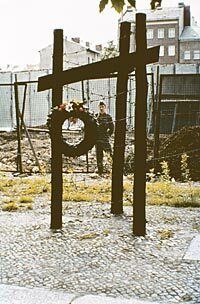