Paterson is a wonderfully gentle and gently amusing film. It is almost entirely without plot but that is no complaint. It has a rhythm to it, revolving around the daily routines of the protagonists — Paterson (Adam Driver), a poet and bus driver, Laura (Golshifteh Farahani), his wife, and their dog, Marvin — and it has a lovely, deliberate, serene tone.

Each day they wake up, Paterson writes poetry in his special notebook before driving his bus, the couple talk at home about their lives, and then Paterson walks the dog and visits the local bar. There is no violence in it and the drama is all strictly down to the neighbourhood or household level. There is no saving the world, no murder, no heist, no big marriage — just a reflection on love, friendship and creativity. It is also a homage to the rich history of a small city in New Jersey.

The film is set in Paterson, New Jersey, a city which is the setting of William Carlos Williams’ epic poem, Paterson (the poem was the inspiration for the character in the film, although the poems used were written by New York poet Ron Padgett and by director Jim Jarmusch himself).

It was the home of the Italian anarchist Gaetano Bresci for several years while he worked as a weaver before returning to Italy to assassinate King Umberto I.

It was also the site of a massive silk strike in 1913 which lasted six months and resulted in the arrest of 1,850 strikers including leading figures of the Industrial Workers of the World, William Dudley Haywood and Elizabeth Gurley Flynn.

The film pays its respects to the town: in a brief cameo Method Man (as Cliff Smith) quotes William Carlos Williams; two young anarchists are overheard discussing Bresci on the bus; and Paterson and bar owner Doc (Barry Shabaka Henley) talk about how Lou Costello, from Abbott and Costello, came from Paterson.

Jarmusch’s film doesn’t wear its politics on its sleeve but it is certainly unusual in presenting us with a sympathetic and complex portrait of a young working class couple. It takes fairly mundane subject matter but really brings out the richness of the couple’s creative lives and of the history of the city they live in. It is humorous, charming and warm without being schmaltzy. I came out of it feeling cheerful and sought out some of Padgett’s and Carlos Williams’ poetry. 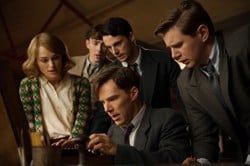