Power of the Pickets

This article is over 18 years, 3 months old
Picketing started the 1984 miners' strike and, as the Walrus's analysis shows (April SR), could have won it.
By Andy PhippsPhil Turner
Downloading PDF. Please wait...
Saturday 01 May 2004

Flying pickets from Cortonwood near Rotherham walked out when its closure was announced and brought the rest of the Yorkshire coalfield to a standstill. Pits in Scotland and Wales also had to be picketed out by Yorkshire miners as the strike spread nationally.

At Manton Colliery – a pit geographically in Nottinghamshire but within the Yorkshire coalfield – a heated meeting of more than 1,000 miners on the Saturday before the year-long strike was to commence voted against stopping work. But when flying pickets from Rotherham’s Silverwood pit arrived on the Monday morning, not one miner crossed the line. The minority won over the majority.

That mood of solidarity against the bosses also prevailed in the early days of picketing in Nottinghamshire itself – although only after Doncaster miners successfully turned over NUM officials to send pickets. Nearly every pit in the Notts coalfield was shut by Yorkshire flying pickets in the first week. But when the pickets were called off for two weeks to allow Notts miners their own ballot, the writing was on the wall. Once the ballot was lost, the battleground shifted to workers outside of the pits – electricity and steel workers. By now many of the miners who thought they could win alone realised workers had to unite against Thatcher and the state. Once Orgreave became the focus, steel became the key. Even then rank and file miners had to petition Arthur Scargill to counter Yorkshire NUM officials, who still sent pickets to Nottinghamshire, asking them to call at Orgreave on their way home!

But no serious attempt was made to appeal to rank and file steel workers to support the miners. Mass pickets could have created a focus to win action.

At the height of the police violence at Orgreave, injured pickets could have been taken around steel and engineering works in Sheffield and Rotherham to call for solidarity. The real difference to 1972 in 1984 was not just the lack of a clear strategy pursued by all NUM area officials, but also of a politicised rank and file network to deliver the solidarity on the ground. Many miners were not involved in activity and felt isolated at home, or only later got involved as the strike shifted to a more defensive stage centred on the pit villages. But there were glimpses of marvellous rank and file solidarity – as with the blacking of the Sun and Express by print workers – that showed the potential for wider action. 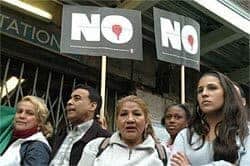