The Power of Protest

This article is over 19 years, 9 months old
Thousands of jobs to go in the Post Office; taxpayers to fund a compensation package to Railtrack shareholders; open talk about a leadership challenge to Tony Blair. Is it any wonder that the gloss is coming off the New Labour project?
By Editorial
Downloading PDF. Please wait...
Thursday 04 April 2002

Recent polls suggest that Labour’s lead over the Tories has been halved over the last month. One poll for the Sunday Times found that 54 percent of people said they felt Blair had been a disappointment, 20 percent thought he should go now and 43 percent thought he should go at the next election. The speed at which the disillusionment with New Labour is increasing is now alarming even the most ardent Blairite loyalists. Former Labour ministers such as Chris Smith, Peter Kilfoyle and Glenda Jackson have all spoken out against the government.

The blame for this lies squarely with the Labour leadership. The decision by Blair to align himself with some of the most right wing world leaders, including a religious fundamentalist in the White House, a neo-fascist in Rome and an arch- conservative in Madrid has brought widespread anger and contempt, not just from ordinary workers, but from some trade union leaders and many Labour Party members as well. In part this explains why the anger with the government is proceeding with such speed. But there is also growing opposition to the so called ‘war on terrorism’.

We were told at the end of last year that the military campaign in Afghanistan was a success, that Al Qaida and the Taliban were routed and the world was now a safer place. However, the decision by the government to send over 1,700 troops to Afghanistan shows that the war there is far from over. At the same time preparations for a war on Iraq some time in the coming months continue apace. Blair is set to visit Bush this month, where the decision to attack may well be taken. This is despite the widespread anger at such a move that exists in Britain as well as throughout the Middle East. The Israelis continue their relentless assault on the Palestinians, destabilising the whole region. Any attack on Iraq could quickly spread to a much wider war.

It is these right wing, pro-war policies that make the Blair government so unpopular with the wider electorate. The fact that over 130 Labour MPs have signed an early day motion against military action in Iraq reflects this growing unease. More importantly it shows that the protests and demonstrations organised by the Stop the War Coalition and CND are having a significant impact and are beginning to reverberate well beyond those who attended the demonstrations to a much larger section of the working class.

There is a dramatic and significant shift to the left taking place in Europe that British workers are not immune to. The spectacular anti-capitalist protests of half a million in Barcelona and three million in Rome last month caught the most optimistic forecasters by surprise, not just by the size and mood, but by the fact that they involved large and significant groups of workers. The May Day protest in London this year is set to bring trade unionists and anti-capitalist protesters together in one united demonstration with a rally that will end in Trafalgar Square. The fight against the system is now beginning to mobilise many of those who have the power to overthrow it.

This is crucial, not simply because we want to halt the warmongers in their tracks, but because we have to show that there is an alternative to the system of neoliberalism and the free market, of which Tony Blair has been the number one advocate. 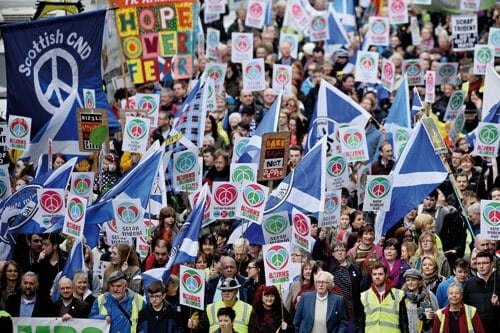 Scotland, the SNP and the future of socialist politics

On the Eagle's Wing

Greece at a crossroads