Press Freedom Down the Drain

This article is over 17 years, 10 months old
On the day after the Hutton report was published I was involved in my first spontaneous walkout (’BBC: Public Service Demonstration‘, February SR).
By Tim Malone
Downloading PDF. Please wait...
Thursday 04 March 2004

It felt odd being part of a protest where the main organisers were chanting to bring back the boss. The walkout was undoubtedly organised and led by those most upset by Greg Dyke‘s resignation, and took both Bectu and the NUJ by surprise. It‘s unclear whether Dyke was popular among some staff for the corporate initiatives (sickeningly entitled ’Cut the Crap‘, ’Make it Happen‘ or ’The Big Conversation‘) or perhaps simply for not being John Birt. However, once the protest started many people welcomed an opportunity to express their anger at the Hutton whitewash.

As news of the protest spread throughout the television centre (and by e-mail to other sites) hundreds of people rushed outside to join in. Those who rushed to join it were not just there to join in with the chants to ’Bring back Greg‘ but also to protest at the vilification of the BBC by the government and significant sections of the press.

People have been worried by the ’unreserved‘ apologies and threats of wholesale changes of the BBC promised by government ministers. As MPs have used the opportunity to call for privatisation, and Murdoch has complained about the size and ’unfair advantage‘ of the BBC, Norman Tebbit and Michael Portillo have been suggested as future candidates for director general. Despite the reporting of the Iraq war being overwhelmingly biased to the government the consequence of even a few critical reports has led to talk of even more tightly controlled ’public service‘ broadcasting.

So that day‘s walkout was a great chance for people to ’cut the crap‘. 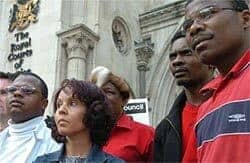 The Key to the Movement is that it's Moving