This article is over 17 years, 6 months old
The person that Orson Welles based Citizen Kane on certainly did go 'to extraordinary lengths to try and get the film shelved', as Stephen Philip wrote in his review of The Aviator (Movie News, December SR).
By Sasha Simic
Downloading PDF. Please wait...
Tuesday 01 February 2005

But Stephen wrongly identified that person as Howard Hughes. The film was actually based on the life of media tycoon William Randolph Hearst.

The plot of Citizen Kane closely followed Hearst’s life. Hearst, the son of a wealthy mine owner, was only personally interested in one of his many properties – a small San Franciscan newspaper called the Herald-Examiner. From this one title – and by pioneering modern popular journalism with its mixture of sensationalism, trivia and downright lies – Hearst built America’s first nationwide media chain. Hearst was 76 when Citizen Kane premiered in 1941. By then one in every five Americans read at least one of his papers every week.

Citizen Kane also mirrored Hearst’s mania for collecting antiques and artwork, and towards the end of his life he spent most of his time at San Simeon, a Californian castle he built on an estate half the size of Rhode Island which appears as Xanadu in the film.

But what really angered Hearst about Citizen Kane was the character of Susan Alexander. In the film she is a shop girl who becomes involved with Kane – a relationship which is used to destroy his political ambitions and his marriage. She becomes Kane’s second wife and attempts suicide when he tries to impose a career for her in opera – something she has no talent for. They go on to endure a sterile and empty marriage. Susan Alexander was obviously based on Marion Davies, a former showgirl who became Hearst’s lover when he was in his sixties and who he tried, unsuccessfully, to launch as a film actress in Hollywood. It’s rumoured that Rosebud – the word which drives the plot of Citizen Kane – was Hearst’s pet name for Davies’s pudenda, which if true showed that Welles really knew how to twist the knife.

Angered by the film’s obvious parallels to his life, Hearst tried to destroy it. He was a powerful and vindictive man with a long reach. Douglas Fairbanks once asked Hearst why he preferred newspapers to motion pictures. Hearst replied, ‘Because you can crush a man with journalism, and you can’t with motion pictures.’

Hearst used all his power and influence against Citizen Kane and Orson Welles. The threat that his newspapers would reveal long suppressed Hollywood scandals meant that the heads of the studios, led by Louis B Mayer himself, tried to buy the negatives and burn them. Hearst’s papers accused Welles of Communism – he was a fellow-traveller without doubt – and tried to frame him for a variety of crimes using the FBI.

As a result of this campaign, cinemas across America refused to screen the film. It only won one of the nine Academy Awards it was nominated for in 1942, and Welles’s career suffered a huge setback from which it never really recovered. He lost his valued autonomy and had the final cut of his follow-up film – The Magnificent Ambersons – taken from him. Citizen Kane itself was buried for nearly a quarter of a century before it would re-emerge and be reassessed as one of the greatest films ever produced. 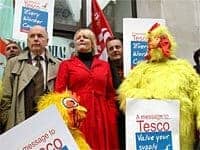