Radical Feminism is largely a history of the Reclaim the Night (RTN) protests, but Finn Mackay also explores some of the debates around the feminist movement in Britain today. She provides an interesting, if potted, history of the women’s liberation movement and the recent questions surrounding feminist organisation and ideas around language, privilege theory and intersectionality.

RTN started in the UK in 1977 as a reaction to the danger posed by the Yorkshire Ripper and the more generalised threat of violence against women. After fading out in the 1990s the marches restarted in 2004, partly in reaction to raunch culture, with the first demo marching past the newly opened Spearmint Rhino strip club on London’s Tottenham Court Road.

Mackay paints a picture of a wildly uneven RTN movement. With no central strategy, RTN marches have sprung up across the UK with different activists employing varying organisational techniques. RTN London stands almost alone as a demonstration where men are not allowed. Mackay spends an astonishing amount of time outlining the reasons why; mainly to preserve the radical edge to RTN and to provide a “safe space” for participants.

Of course, women should be at the forefront of fighting their oppression, and all the organising that comes with it. But I am unconvinced by her assertions that all-women demonstrations are necessary.

Although I feel Mackay attempts to bridge the gaps between radical feminism and other schools of thought, she does not go far enough. She does explain why some feminists prefer to organise in groups from which trans women are excluded, on the basis that it is the lived social experience of gender from infancy that shapes us. But she brushes over the transphobia of some radical feminist groups.

Mackay offers up a robust critique of third wave feminism, which she decries as individualistic, consumerist and based on the questionable notion of “choice”. There is also a useful discussion of Queer Theory. This is important because the idea of construction of identity has implicit organisational questions for feminists today. Mackay manages to draw out some interesting debates, in particular around the potentially problematic descriptor “cis” in reference to how someone identifies as the gender they were presented with at birth.

Radical Feminism is a broadly interesting text looking into recent feminist organisations and the political questions they face. Although I have some central points of contention with Mackay’s analysis of women’s oppression and her organisational conclusions, her dedication to a movement which seeks to highlight an important issue and empower women cannot be doubted. 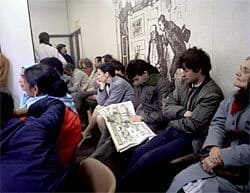