This article is over 8 years, 8 months old
Bankers have become among the most hated section of the population, but mainly because of the huge rewards they continue to give themselves despite the massive financial crisis they caused. Mike Haynes looks at why we should loathe their other thieving activities - those on the high street.
By Mike Haynes
Downloading PDF. Please wait...
Sunday 01 December 2013

Twice last summer robbers made off with the cash boxes containing a few tens of thousands each from local banks. But who were the bigger thieves – the robbers or the branches of the banks whose cash was stolen? I have no romantic illusions about people who rob banks. But thinking about how the banks themselves have robbed us at a branch level is an interesting exercise.

When dodgy dealing and debt shook the global financial system in 2008 most attention was focused on what is called investment banking. Investment banks have two jobs.

For a fee, they help big business raise funds, issue shares and undertake mergers and acquisitions. But they also trade in the financial markets. They do this partly for themselves and partly for pension and hedge funds and the like.

Investment banking used to be separate from commercial or retail banking. The focus of retail banking was on the millions of ordinary customers and the needs of small and medium sized businesses.

But with deregulation some investment banks moved into retail, and some retail banks – Barclays in the UK and Deutsche Bank in Europe, for example – developed huge investment bank operations.

They then amplified them by manipulating markets, insider trading, deliberate deceit in selling dodgy products to funds and investors, false accounting and even the odd bit of money laundering.

This sorry story lies behind some of the huge fines levied in the US and the lesser ones imposed by the UK’s notoriously soft touch regulators.

But what of the retail side? There is much talk of separating investment and retail banking, of the difference between “good banks and bad banks” and hiving off the bad bits to reduce risks. But the story of banking on the streets of the UK is also a sorry one.

Running the branch of a high street banking was once said to be staid and boring – think Captain Mainwaring in Dad’s Army. But deregulation in the UK from the 1980s created a free for all where we have all been defrauded by the high street banks.

False representation
Defrauded is a strong word. Fraud is something you can go to jail for. According to the UK Serious Fraud Office, fraud is the “abuse of position, or false representation, or prejudicing someone’s rights for personal gain”.

Local trading standards offices have the power to come down hard on businesses involved in misrepresentation and deception of customers. The law even allows for seizure of goods and property on suspicion that assets may have been acquired by criminal activities including fraud.

But the regulators, and the police who hurry to catch those who rob the banks, do not apply these laws to the banks who rob us. When banks commit fraud it is redefined as “mis-selling”. They are either allowed to get away with it or, if found out, recompense the customers.

“It is easier to rob by setting up a bank than by holding up a bank clerk”, the playwright Bertholt Brecht famously said. The ease is twofold – the crime is easier to commit because running a bank allows you to skim “billions from millions”. And then, if you get caught, it is easier to use your position at the centre of the system to get off with little more than a slap on the wrist.

In the last few decades the banks have found so many ways to cheat their customers that it is hard to keep track of them. The pensions mis-selling scandal of the late 1980s and 1990s, where people were encouraged to opt out of better pension schemes for worse ones, was a sign of things to come. An astonishing 10 billion pounds had to be paid out in compensation. That’s more than 200 poiunds for every adult in the UK.

Then there was the endowment mortgage scandal, where people were encouraged to take out the profitable but inappropriate financial product to help with their house purchases. The estimates suggest that 50 to 60 percent were mis-sold, leaving huge numbers of people with inadequate sums at the end of their mortgages. Many thought it could not get any worse. But it has.

We could start today with the 50 million plus active current accounts in the high street banks. Most of these effectively offer no interest, allowing banks to borrow money from us for free while lending it out to others for their profit. Then there is the issue of penalty interest charges on overdrafts, which have provided a total 2 to 3 billion pounds profit for the banks every year.

In the 2000s, campaigners fought a long battle to show that these were illegal. Eventually the courts ruled not so much that they were legal as that they were not illegal, and the exhausted campaigners lacked the resources to carry on the fight.

The banks promised to change their ways. But have they? Today the high street banks are happy to condemn the extortionate charges of payday lenders such as Wonga, but the effective rate of interest for their own penalty charges is often as high and sometimes higher.

If you are not in debt then you could always upgrade your current account to an “added value”, “reward” one with extra insurance, road-cover and the like for a standard monthly fee. But few of those enticed by these deals benefit because the conditions often prevent them being able to use the value-added elements and, more often than not, they cost more than they would pay if they bought these things as they needed them.

Payment protection
Next in our list might be payment protection insurance. PPI involved selling insurance to anyone taking out loans. You were told the insurance, which might add a quarter to a third to the cost of the loan, would bring piece of mind if you lost your job or became ill. Alarm bells were sounded early on.

The head of Citizens Advice said in 2005 that “payment protection is more about providing profits for the financial industry than about protecting consumers”. But the banks continued to mis-sell on a huge scale.

Perhaps 50 million PPI policies were sold, bringing in billions each year. For the banks the profit on them ran at as much as 70 percent. This was because they were offered to people who could not benefit from them or because the terms were so tight than most claims would be rejected.

Today the banks are paying PPI compensation that could top 20 billion pounds. That’s another 500 pounds for every adult in the UK. Lloyds, Barclays, RBS and HSBC lead the way, with Lloyds alone setting aside more than 8 billion pounds to compensate its customers.

Some things sound more technical but they remain scams. There is, for example, the case of the precipice bonds. Some 5 billion pounds of these were mis-sold, usually to older people, in the belief that they would secure their retirement. In fact, as their street name suggests, their value could and did collapse overnight.

Then there were the so-called “interest rate swaps”, mis-sold to small businesses to protect them, that might lead to another 3 billion pounds of compensation.

Or what about all those adverts about loan consolidation from FirstPlus – a subsidiary of Barclays – fronted by Carol Vorderman?

So how much does this work out at per branch? In England and Wales there are around 10,000 bank branches, so if we just take PPI that means the average fraud from this alone is 1.5 to 2 million pounds per branch!

How does it compare with robbing banks? It certainly beats my local robbers. Even the very big robberies look puny. In 2004 some 24 million pounds was stolen in the Northern Bank robbery in Belfast.

That’s a lot of cash but perhaps the equivalent of the work of around 12 branches in Belfast involved in the PPI scam. In the UK the Northern Bank robbery has only been outdone by the 2006 UK Securitas robbery, which is reckoned to have got just over 50 million pounds. That is huge for thieves but only equivalent to the PPI work of a couple of dozen branch banks.

Add in the other high street bank frauds and it becomes clear that Brecht was right – running a bank is a good way not only to rock the stability of capitalism but also to rob us blind.

You don’t get millions, you get tens of billions, and it is taking place in a bank branch near you. 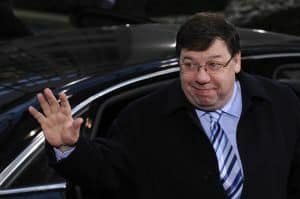 Eurozone on the brink of collapse?