A real fight to repeal the 8th amendment

This month could see a victory for legal access to abortion in Ireland. On 25 May voters will decide whether to repeal the eighth amendment of the constitution, which recognises an equal right to life of the mother and the foetus. This fundamentally removes control for millions of women over their own bodies, and it leaves Ireland decades behind most other western states in terms of abortion rights.

Currently many Irish women are forced to resort to desperate measures, such as ordering illegal — and unregulated — abortion pills online. If you choose to take an abortion pill in Ireland you can be threatened with a 14 year prison sentence. Figures for the numbers of illegal pills used are hard to come by but 78 were seized in one week recently. It is a big health risk taking pills which aren’t subject to regulation.

Other women, if they can afford to, travel abroad to get the help they need, but this is out of reach for many. It can cost around £1,200 to travel to Britain and access a clinic. A study found that around 170,000 women accessing abortions in Britain over the past 35 years gave an Irish address. It is estimated that 12 Irish women a day travel to Britain for abortions.

Sinn Féin and Labour are officially backing a Yes vote to repeal the eighth amendment. The two biggest parties, Fine Gael and Fianna Fail, are allowing a free vote. Although both are centre-right parties and more likely to oppose abortion rights, they are chasing young, women, and urban voters.

If the eighth amendment is repealed then it will be up to the government to legislate. A recent poll from the Irish Times/Ipsos MORI put those in favour of repeal at 47 percent with 28 percent opposed and 20 percent undecided. However it will be a real fight to the last minute, as the percentage in favour has been dropping and the number of undecided has increased by 5 percentage points since January.

The No campaign is going on the offensive. They have hired a PR firm called Kanto, which was connected to the Vote Leave campaign over Brexit. Wicklow County Council, near Dublin, removed lawful Yes posters that had been displayed in public places. In March Wired magazine carried an article titled “Pro-life bots and trolls are gearing up to sway Ireland’s abortion vote”.

As Becca Bor of People Before Profit, who are centrally involved in the Yes campaign, has said, “The #Repeal the Eighth Amendment referendum is one of the most important struggles in decades. The outcome of this struggle will shape politics in the North and the South in the coming years. At stake is a woman’s right to control her own body. Without this fundamental right there cannot be full equality.”

The ruling class in Ireland has historically relied on the Catholic Church, which has attempted to hold back progressive legal changes. But, despite the church’s efforts, it has found itself on the wrong side of history over equal marriage (granted in 2015), divorce (1996) and access to contraception (1985).

Working class communities returned the biggest Yes vote in the marriage equality referendum. The right to a safe, legal abortion is undoubtedly a class issue. If the vote grants access to abortion this can open the door to fights over decent sex education and publicly funded contraception. A Yes vote would also put more pressure on Northern Ireland to change its own laws to match the 1967 Abortion Act in Britain. 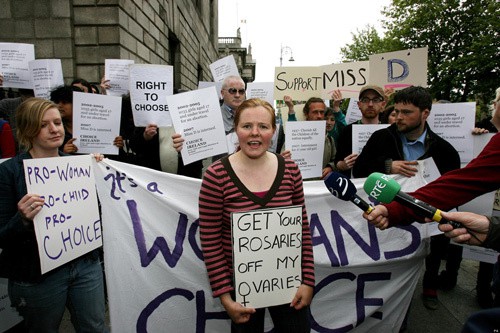 Abortion in an era of neoliberal choice

Abortion: is this the moment?