Professor John Aston, president of the UK Faculty of Public Health which represents 3,300 public health experts working in the NHS, local government and academia, has called for the end of the five day week.

Ashton argues that a four-day week would reduce high levels of work-related stress, allow people to people spend more time with their families and reduce ill health. It would also lower unemployment. Ashton says there is “a maldistribution of work” and it is damaging many people’s health.

“We should be moving towards a four-day week because the problem we have in the world of work is you’ve got a proportion of the population who are working too hard and a proportion that haven’t got jobs.”

There are also record numbers of part time workers who want to work more hours to pay their bill and 2.16 million are officially out of work.

The insanity of capitalism means that millions are overworked while millions are also either underemployed or left on the dole. 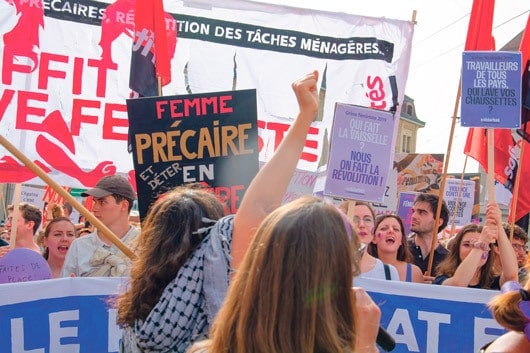 Switzerland: ‘Real equality is far from being realised’

Dinosaurs Have Some Backbone