This article is over 6 years, 3 months old
The crackdown on the Muslim Brotherhood by general Sisi's counter-revolutionary regime has generated much debate on the Egyptian left about how to relate to Islamists. Anne Alexander argues that we must recognise the tensions within such organisations and work with their members.
By Anne Alexander
Downloading PDF. Please wait...
Monday 28 September 2015

The left in Egypt is gripped by an intense debate over the question of how revolutionaries should relate to the Islamist movement in general, and the Muslim Brotherhood in particular. The starting point was a statement published by the Revolutionary Socialists (RS) on 19 July, followed by a longer document calling on the left to rethink its attitude to the Muslim Brotherhood in order to build more effective opposition to the military regime of Abdelfattah al-Sisi.

Some of the key arguments and counter-arguments being exchanged between the RS and their critics have been aired in mainstream media, and the original statements have reached huge audiences online.

The intensity and scale of the debate reflect the importance of the arguments. How can anyone who wants to seriously challenge the Sisi regime fail to grapple with the nature of the general’s principal opponents?

But this debate is also a sign of the depth of the crisis in the ranks of the opposition. The Muslim Brotherhood continues to mobilise its activists sporadically, and there have been occasional sparks of life in the workers’ movement, but neither have made any real progress in shaking the foundations of the Republic of Fear that Sisi has erected on the ruins of the January 2011 revolution.

Terrorist attacks have even prompted some on the left to argue in favour of closing ranks with the army and police in order to ward off the rise of an Egyptian version of ISIS. Meanwhile, the regime has responded with unprecedented brutality, gunning down leading members of the Muslim Brotherhood in cold blood and rushing through new laws which make organising a demonstration or a strike a “terror” offence.

As the RS point out, some of those cheerleading the crackdown on “Islamist terrorists” had previously declared themselves to be members of a “Third Camp” between the military and the Muslim Brotherhood. This critical distance evaporated, however, in the wake of the bombings and attacks in June and July:

“These people suddenly lost whatever superficial neutrality they claimed in the battle between the terrorism of the state and the terrorism of the armed Islamist groups, declaring ‘bravely’ for closing the nation’s ranks as we are already in a state of war. They repeat the demagoguery of the regime’s mouthpieces, weeping over the soldiers killed in Sinai at the hands of treacherous ‘religious fascism’ while not uttering a word over the murder of peaceful protesters after Eid prayers.”

A crucial error made by those from the Third Camp lay in their analysis of the relationship between the Brotherhood and the counter-revolution, the RS argued. Rather than seeing the Brotherhood and the regime as opposed to each other, the supporters of this position argue that the Islamists and the generals are simply two faces of the same phenomenon: a counter-revolution with a military wing and a religious reactionary wing.

Based on this analysis, while revolutionary socialists should oppose the regime’s crackdown on the human rights of Islamist activists, they should keep their own struggle against the regime entirely separate from the Brotherhood’s battles. The problem with this approach, the RS argued, is that:

“Every step towards the crushing of the Brotherhood narrows the political space for everyone and paves the way for the repression of all. It is a strategic error to keep silent over the repression of the Brotherhood, or to fail to say that defending them in the face of the brutal dictatorship is an integral part of the struggle for democracy and for the return of the Egyptian revolution.”

Failure to understand the relationship between the Brotherhood and the military’s counter-revolution is rooted in a faulty analysis of Islamist movements in general, the RS argued. A crucial starting point for understanding the Brotherhood, and many other Islamist movements with a mass popular base, is to see them as reformist organisations. The key feature of such movements is the fact that their membership is drawn from social classes with contradictory interests.

“On the one hand, sections of its base push for a more radical confrontation with the regime, while sections of the middle class and traditional bourgeoisie seek common ground with it. Thus, the Muslim Brotherhood has for the last three decades existed in a state of constant oscillation between appeasement and confrontation, between challenging the regime, mobilising against it, and attempting to secure a deal allowing the Brotherhood wider participation within the same regime.”

Writing in 2014, leading RS member Sameh Naguib put forward an analysis portraying the Brotherhood’s behaviour during the revolution as that of a vacillating, reformist organisation, trapped between the old regime and the ongoing popular mobilisations in the streets and workplaces. In August 2015 he called for a rethink of the left’s attitude to the thousand-plus victims of the massacres at Raba’a and Nahda Squares on 14 August 2013. The purpose of the bloody crackdown:

“Was not simply to break up the sit-ins or even to liquidate the Brotherhood. The aim was, and still is, to break the revolutionary situation which the revolution of January 2011 created, to obliterate the revolutionary consciousness which was born in the huge sit-ins in city squares across Egypt… This is why the martyrs of Raba’a and Al-Nahda, of the Republican Guards Headquarters, of Al-Manassa and al-Fath mosque, are martyrs of the Egyptian Revolution alongside the martyrs of January 2011, of Maspero, of Mohamed Mahmoud Street and the Cabinet Offices.”

Even more important than a united front of all the revolution’s dead is the possibility of a united front among those still living. Although the RS is not calling for an alliance with the Brotherhood, it argues that work “side by side with the young Islamists who are facing the machinery of military repression every day” is crucial to building a movement capable of challenging the regime. This means clarifying that the real enemy is Mubarak’s and Sisi’s state, not the Brotherhood.

Much of the criticism of the RS position has focused on the notion that the Brotherhood can be labelled “reformist”. Amr Abd-al-Rahman, writing in independent online newspaper Mada Masr, argues that the Brotherhood cannot be considered reformist because the organisation is the political representative of a fraction of the ruling class. In other words, the organisation’s role can be deduced from the presence of millionaire businessman Khairat al-Shater in its leadership. He also sharply criticises the Brotherhood’s track record in office, arguing that the label “reformist” makes no sense when:

“The experience of the Muslim Brotherhood in power was identical to the experience of their predecessors. They kept the same economic and social policies, and in terms of an organised attack on public and private freedoms, their rule was worse.”

There is plenty of evidence to contradict this. The dramatic surge in violent repression under Sisi undermines the picture of the Muslim Brotherhood as being uniquely repressive when in office. According to statistics gathered by activists for the WikiThawra project, 470 people were killed during protests under Morsi compared with 3,248 between July 2013 and January 2014.

It is questionable how far Morsi and his government were genuinely “in power”, as opposed to being simply “in office”. The institutions of the state which were primarily responsible for the violence against protesters, such as the Armed Forces and Interior Ministry, were the ones which the Brotherhood had tacitly agreed to leave unreformed.

The speed with which the Brotherhood were ejected from the other institutions of the state underlines this point. There was no hesitation on the part of the senior officials of the state as to whose call for loyalty they should heed: Morsi’s or Sisi’s. It was only the Brotherhood’s own members and very close supporters who chose to stand by their president. This was in turn a sign that, despite the media frenzy about the “Brotherhoodisation” of the state, the Islamists had made little serious headway in changing the composition of the bureaucracy.

Moreover, following the coup against Morsi, the ruling class swung solidly behind Sisi, leaving the Brotherhood completely isolated. One clear sign of this was the nature of the violence which followed the coup — massacres of peaceful protesters rather than armed clashes between groups battling for control of the state. There was no split in the army, no fracture in the ranks of the police and not a whisper of dissent in the mass media as Sisi rallied his troops for the onslaught on Raba’a and Nahda Squares.

So, yes, the Brotherhood raised expectations of reform and failed to deliver. And yes, they prostrated themselves before the “deep state”, and in the process dug their own graves. Morsi, of course, repeated Salvador Allende’s mistake of appointing the man who would overthrow him. Social democratic reformists do all these things, and worse, in moments of profound class polarisation and struggle.

The RS have never argued that the Brotherhood has either the programme or the social base of a social democratic party. The Brotherhood’s reformism is an expression of its internal social contradictions which pull it constantly between confrontation and compromise with the regime, often despite the wishes of its leadership. The contradiction becomes particularly acute at periods of revolution or intense social and political struggle when the gap between the expectations of supporters and the ability of the leadership to deliver is widest.

Sisi was very well aware of this. It is not rivalry with the Muslim Brotherhood’s leadership which drives his vicious repression, but his fury at their inability to contain the anger from below. The massacre at Raba’a was clearly a message to the poor: “Do not raise your heads again.”

That is why the RS are right to argue that the long road towards building a revolutionary alliance capable of ending the general’s regime has to start by working alongside the Islamist activists who are confronting repression every day, despite the personalities and politics of their leaders. 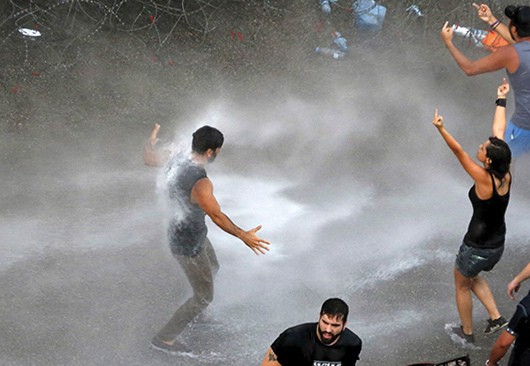 'The union is a shield and our sword is the strike'

The dentist and the story that shook Egypt